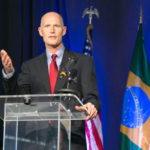 The Florida Supreme Court on Monday said Gov. Rick Scott should revoke the suspension of a Miami Lakes mayor who was acquitted of federal corruption charges. Michael Pizzi was suspended by Scott last year while facing criminal charges but went to the Supreme Court seeking to get the suspension rescinded after a jury cleared him in August. The governor’s office pointed to an election that was held during the suspension to seat a new mayor.

But in a dissenting opinion, Justice Charles Canady, joined by Justice Ricky Polston, wrote in part that Pizzi’s request should be denied because the governor “does not have an indisputable legal duty to revoke the executive order that suspended the petitioner from office.”