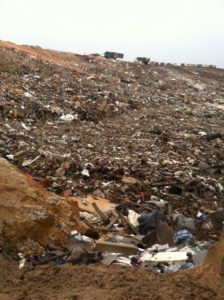 Apparently earlier this week, Miller sent a letter to FDEP rescinding the Amended Site Access Agreement between South Palafox and the department, which led to FDEP being unable to deliver cover material to the landfill site.

“In said correspondence, you set forth wild mischaracterizations, wholly irrelevant assertions, and completely unfounded, false allegations as to why the Agreement should be rescinded,” wrote the district director, Emile Hamilton. “Additionally, while much of said correspondence is virtually incomprehensible, it appears you further allege that the department is responsible for the lack of final closure of the Rolling Hills Facility to date.”

Hamilton said that FDEP has worked to “diligently to perform the activities necessary to achieve final closure of the Facility as expeditiously as possible, despite noncooperation and road blocks by South Palafox at nearly every juncture.”

He cited a recent example:

The most recent example of South Palafox Properties’ noncooperation and continued roadblocks occurred on Monday, January 4 when South Palafox Properties went so far as to bypass the department’s gate lock in order to prevent access to the property. By denying the department access, you have knowingly delayed the delivery of 4400 cubic yards of cover material that was scheduled for delivery this week. This material and site access were key components in the effort to accomplish final closure, which would also serve to immediately abate the H2S odors coming from the site that are impacting the surrounding community.”

Hamilton ended the letter with: “In short, the department disagrees with all assertions set forth in your correspondence, and will proceed accordingly toward trial holding South Palafox fully responsible for its actions.”