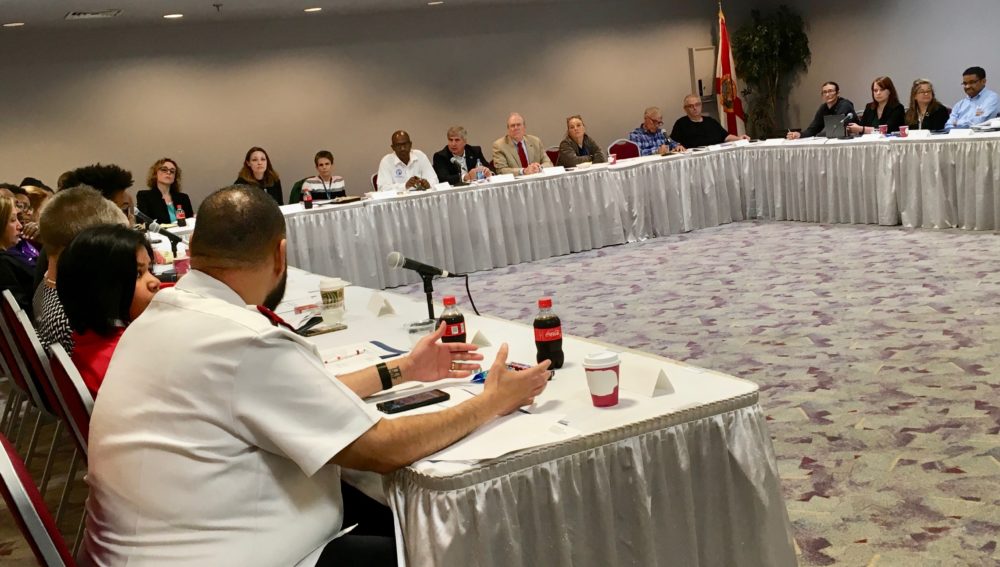 The conversation is just getting started, but Pensacola Mayor Grover Robinson struck an optimistic tone as the city and Escambia County began exploring how best to address the issues and needs of the area’s homeless community.

“I do think we’re in a more positive place than we’ve been,” Robinson said Friday during a joint city-county homeless summit. “The county and city have said, ‘we’re going at this together.’”

The summit, held at the Pensacola Bay Center, convened local officials with area organizations that work with the homeless community in order to facilitate a dialogue on the subject.

“What can we do as a county or municipality,” asked Escambia County Commission Chairman Lumon May. “Hopefully, we’ll walk out of here with two or three goals that are concrete.”

After more than three hours of workshopping the topic, identifying areas of need, a few primary areas of focus were settled upon: there is a big need for temporary, but also permanent housing; for a successful transition out of homelessness, individuals need and greatly benefit from case management, or assistance navigating potential services and assistance options; and the system used to share data among assistance organizations, the Homeless Management Information System, or HMIS, could be more user-friendly.

“We have a lot of work ahead, but I feel confident we’re going in the right direction,” Robinson said on his mayoral Facebook page after the summit.

Prior to the April 5 summit, Robinson had suggested that perhaps there was a need for a large come-as-you-are facility, which would not have entry requirements such as sobriety. Though there was not much appetite for a large facility among assistance organizations, discussion during the summit seemed to indicate a downsized version could still be on the table, with such a facility not exceeding 15 to 20 occupants.

However, there were also concerns raised about the prospects of such a facility. Jason Grizzard, vice president of ministry services with Waterfront Mission, said he thought a come-as-you-are facility would attract more homeless people to the area.

“They will come as they are, and there will be more panhandlers, more homeless people in Pensacola than there was before,” he said. “I don’t know that, but that is my fear.”

While the city-county summit was for the most part a cordial affair, it did see a couple of tense moments. The first occurred when a homeless woman expressed exasperation with the pace and direction of the day’s discussion — “Y’all are suffering from death by meetings!” — and the second arose out of a discussion during public comments about the lack of shelter options in the area for the LGBTQ community, particularly trans individuals.

“There is an entire demographic in this area that is being misrepresented and erased,” said Devin Cole, leader of Strive, a transgender advocacy organization.

Cole said it was not right that some area organizations had a policy against accepting certain individuals. The comments received a swift warning from the panel.

“You too,” Cole replied.

Bookman assured the advocate she understood his concern, recounting an instance in which she provided a trans person with clothes out of her own closet.

“We actually lost funding from some churches,” Bookman said. “So, I get it.”

Mayor Robinson attempted to calm the moment, telling attendees that he hoped “we can all work together.”

“We’re not going to sit here and throw stones at other partners we have to work with,” Robinson said. “— this is where I didn’t want to go, we’re all in the boat together.”

Mike Kimberl, of Sean’s Outpost and the Alfred Washburn Center, disagreed with the mayor’s characterization.

“I think they were giving an honest critique,” he said. “I do not believe they were throwing stones.”

Kimberl had brought up the same point earlier during the wide-ranging discussion among panel participants. He said it was essential the area provide a homeless shelter that serves members of the LGBTQ community, and took issue with organizations and facilities that do not.

“I think a lot of time in our community when we say ‘faith based,’ we mean discriminatory,” Kimberl said.