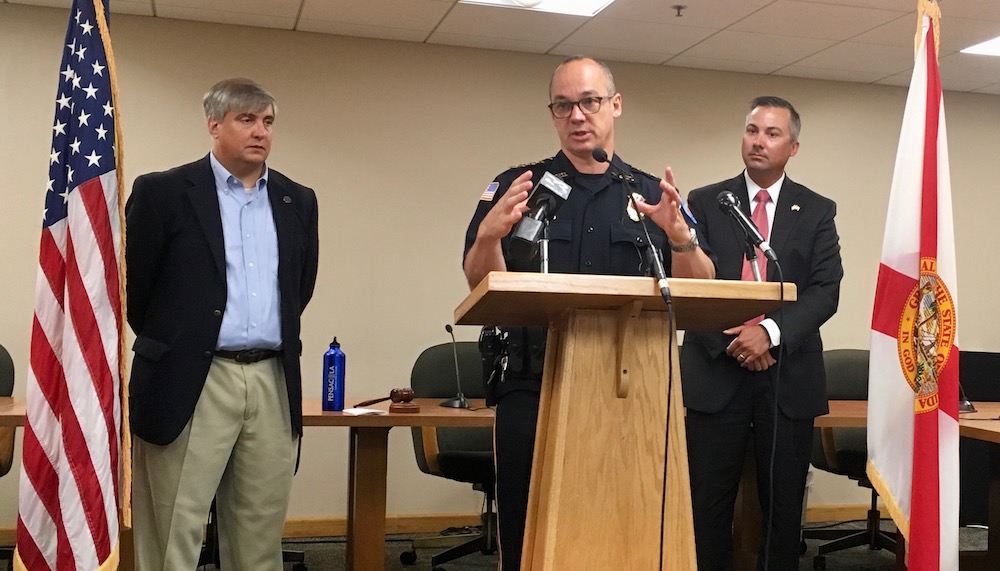 The city of Pensacola is partnering with the United States Attorney’s Office to form a task force purposed with addressing gun violence and also provide training for the Pensacola Police Department.

The partnership was first announced Friday, but Mayor Grover Robinson was joined at his weekly press conference Monday morning by Police Chief Tommi Lyter, as well as Jeff Tharp, an assistant U.S. district attorney with Florida’s northwest district to formally unveil the effort.

“Our first and highest priority is certainly to protect our citizens,” Robinson said Monday.

The mayor, along with the police chief and City Administrator Chris Holley wrote to U.S. Attorney Lawrence Keefe on July 26 to request federal assistance with creating a task force. The effort is based on similar partnerships in Tallahassee and Gainesville.

“We’re doing a very similar thing in Leon County right now. That is the model we’re going to try to bring to Pensacola,” Tharp said.

The effort will essentially consist of the U.S. Attorney’s Office leveraging federal reach and resources in an effort to curb a recent spike in gun violence. With federal involvement, the city can tap into agencies like the FBI, DEA, ATF and U.S. Marshal Service.

“We’re here to support any way we can,” Tharp said, also stressing that other law enforcement agencies from throughout the area will be invited to engage. “This issue isn’t just a local Pensacola issue, it’s a regional issue.”

Other than to disclose that the partnership and task force will strive to combat gun violence and provide training for local police officers, and will consist of a community engagement element, insight into this joint effort has thus far been thin.

Tharp said Monday that the effort was currently in its “initial coordination phase.” And Mayor Robinson said that there will be a partnership meeting this Thursday during which some of the operational details will be discussed.

But that’s about it.

“The actual timeline and operation itself, we’re probably not going to disclose that information, because that would actually hurt the operation itself,” Tharp explained. “But, you know, it’s one of our — gun safety and violence, the prevention of violence, is one of the priorities of the department of justice, so we’re going to use our resources and the operation will last until we, until we feel that we made good progress in the violence in the city.”

What About the Training?

Mayor Robinson said that an important aspect of this federal-city gun-violence task force effort is the training of Pensacola police officers.

“More than anything else, we also believe that we will be getting some training for our Pensacola Police Department,” the mayor said Monday. “So, we’re very excited about that.”

The need for officer training is not a new notion. It’s been a stated priority of both Robinson and Lyter for some time.

“We have a young force. We’ve said this before. And we need to be working on that,” Robinson said Monday, acknowledging again the need for police training and explaining that the police department’s training had been reduced in recent years. “We stepped into a situation where we realized that training had been cut. Dramatically.”

“We had a high turnover. That’s not a secret. We’re a very young police department,” Chief Lyter said, agreeing there was a need for training, adding that two officers are currently undergoing the training necessary to provide the force with in-house training, a more affordable option that was discontinued due to retirements.

In recent weeks, the discussion of police training has been had in the context of a July 5 incident in which an officer fatally shot a citizen. The issue is currently being investigated by the Florida Department of Law Enforcement and city officials are withholding comment on the subject, except that Mayor Robinson has pointed to the need for better training in the wake of the event.

On Monday, Robison said that the task force partnership was a longer term effort inspired by a season of gun violence in the area, but that it also seemed like a prime opportunity to seek training for its police officers.

“This has been in the works for some time,” the mayor said. “And then, for us, it sort of dovetailed in to some other efforts over the last couple of weeks that we’ve been looking at dealing with training.”

When asked how reducing gun violence with the help of federal law enforcement agencies related to the separate issue of police training and, more specifically, police training geared towards use-of-force minimization, the mayor conceded they were different issues but maintained there would also be relevant crossover.

“Some of it is two totally different issues, but some of it is the same,” Robinson said. “Some of it bleeds over. Everything won’t be exactly the same, but I think some of it, the tactics you use, will spillover somewhat to what we’re doing.”

Regardless of the partnership, Robinson said, the city was dedicating funds in the upcoming budget towards training needs for the police force: “We were making that commitment.”

Chief Lyter said he was not yet sure exactly what type of training the partnership will facilitate — “we were working through this morning, about what the training, what I’m requesting, what it is that they can offer” — and Tharp also did not yet know.

“We have a wide range of training that we can offer. Specifically what training or classes we can provide will be determined at a later point,” Tharp said. “We’re going to get together with the chief and we’re going to decide what they’re wanting and what we can offer, but right now, — we have resources, but we haven’t gotten into specifics yet.”