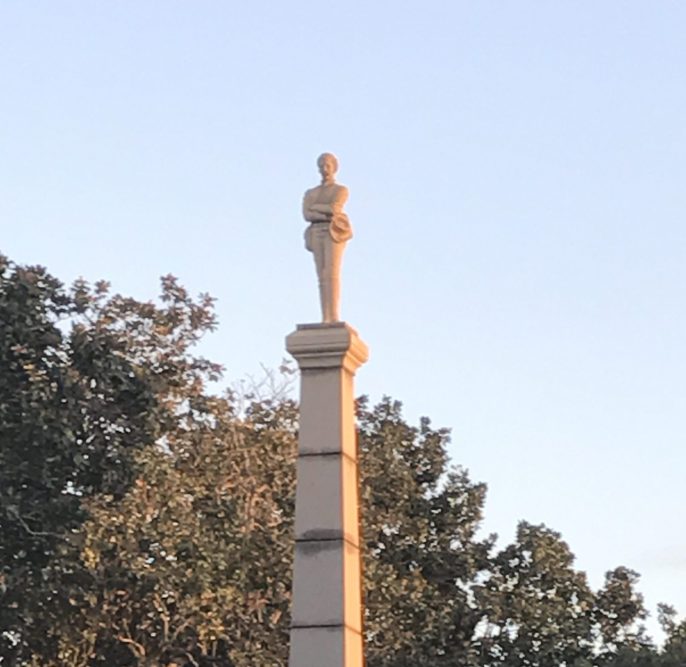 NewsRadio 1620 last week tried to get Pensacola Mayor Ashton Hayward to tell his current plan for the Confederate monument in Lee Square. Two months have passed since Mayor Hayward announced he wanted to move the statue dedicated to the Confederate dead.

What radio listeners heard were very general thoughts about a very vague plan. The mayor wants the community to put the statue in proper context, using the word five times during the two-and-half-minute discussion. However, he didn’t explain the context he wants told. He also wants a public discussion but gave no details on how or when he would have such a meeting.

The mayor brought up with NewsRadio host Andrew McKay a conversation he had with a lady on Oct. 3.

“Andrew, yesterday I was driving home from Destin and Fort Walton and I spoke to a lady about it——you know people see me on TV they talk to me. She knew who I was. And we had a very good dialogue and conversation about it. She talked about history and talked about the different subject matters that go with Civil War so it was very interesting to hear her perspective.”

He added, “But, as we talked about before I think, you know the city has one monument. It’s very controversial on both sides we greatly respect that.”

Controversial on both sides? Sounds familiar.

The mayor said he wanted Council Executive Don Kraher to do something, but he didn’t complete the thought. Instead, he jumped back to context, education and conversation.

“I do think that we need to put in them better context and really educate the community about it because that conversation really was a positive that came out of this whole thing discussing what really happened and the position everyone was on,” he said.

When McKay pressed that it sounded like he still favored moving it but wanted to “have some kind of open discussion with people where we can come up with the best idea,” the mayor wouldn’t quite commit.

“I think the most important thing, Andrew, is what we discussed and put it in the right context. You know whether we move it or don’t move. I think the public is very important as we said it from the very get go,” said Hayward.

“I want to make that very clear we’re not going to do anything without public input. You know there’s something on the books that when you talk about all our monuments in the city you know you can’t just have historical markers moved. So I think it’s important to have that discussion.”

When McKay tried to summarize the mayor’s position as being “you want to talk with people and get more consensus around the choice you make is that what I’m hearing you say now,” Hayward said he has been all over the city and heard the citizens.

He said, “You know what I’m saying is that I am everywhere in the community, and I’ve had both sides say: “you know, Mayor, why don’t we put this in the right context;” “Mayor, that was a great conversation that St. John’s Cemetery came out with;” “Mayor, the Veterans Memorial Park is a place.”

He continued, “I think we need to be intelligent on what we do. You know you talk to historians, talk to our history and see what (is) the (best) place. The best place might be to leave it right there. The best thing might be to move it, but I do think putting in the right context the way it was talked about–no matter if it’s Charlottesville, Pensacola, Florida, or Richmond, Virginia.

The mayor ended the discussion, “Where we’re do needs to have some educational components around that. So that’s one of the things that we need to continue to discuss as a community.”

1) The states rights for which Confederates fought were the rights of certain citizens to own other human beings.
2) Tearing down monuments does not erase history. We learn our history from books and museums. Monuments are for honoring people, and they serve as symbols.

What is the context Mayor Hayward wants taught? And more importantly, how does a mayor who hasn’t held a town hall meeting or given a State of the City address in four years lead a public discussion on racism, Civil War and Confederate monuments?

1 thought on “Pensacola mayor shifts stance on Confederate statue, but to what?”