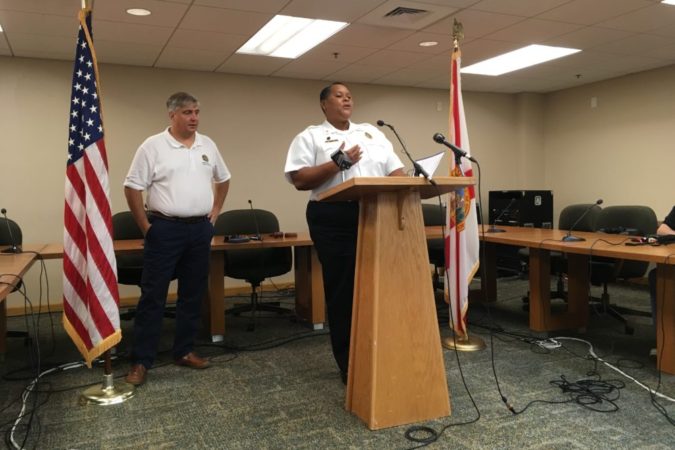 PENSACOLA: After last week’s revelation that the state is willing to rethink the much derided concept of running a dividing wall down the center of West Cervantes in an effort to improve safety along the corridor, the topic took center stage at Pensacola Mayor Grover Robinson’s weekly press conference Monday.

But before fully wading into the presser — which also included comments on the logistic of local 5G infrastructure and bike cops — the mayor gave a nod toward National Fire Protection, introducing Annie Broxson, fire marshal at Pensacola Fire Department, to announce the week’s theme: plan and practice potential escape routes.

“It’s just a habit now. My family looks at me like I’m crazy, but I tell them, ‘I always want to know my way out of any building,” Broxson said, explaining how she eyeballs exit scenarios. “If you go to a hotel, know your way out, if you go to the Bay Center, anywhere out of town, just know your way out of the building. Not just in you home, but everywhere. Even in this building.”

Getting Over the Wall

Local officials have been begging the Florida Department of Transportation for a couple of months to no avail to reconsider employing a barrier wall on West Cervantes in an effort to keep people from crossing the street in undesignated areas. Last week, it finally paid off.

“We continued to keep pleading with them and obviously citizens spoke,” Mayor Robinson said.

The mayor attributed FDOT’s change of tune primarily to public input, not the balking of elected officials.

“If you want to change the legislature, citizens need to speak up. The mayor, local officials saying something — they really don’t care,” he said. “It wasn’t until they heard from other people that they heard the message.”

Robinson said that his staff will be meeting again with FDOT, but that it looks like the state is probably going to limit the wall to the stretch of West Cervantes near N Street. That’s the location — as detailed on a map, in red marking — where there have been a number of fatalities.

“They have this map, and it’s in red, so it looks like it’s a blood trail going across that whole section,” Robinson said.

In addition to limiting the implementation of a wall, the city is also encouraging FDOT to put sidewalks in along West Cervantes. Areas of focus on this front include the stretch near E, F and G streets, and also areas west of Pace Boulevard.

“Where there’s some retail, we hope to grow sidewalks in there for pedestrians walking along there,” the mayor said.

FDOT also let the city know that it plans to install two additional traffic lights, at R and L streets. This is an element that Robinson has been pushing for, contending that it will improve safety.

“I think that’s going to have a lot of impact on trying to get safe connections in that area and also slowing traffic down,” Robinson said.

In addition to West Cervantes safety improvements, Mayor Robinson said that the city is also focusing on other areas of the city as well. There is an effort to get MLK and Davis changed from one-way to two-way routes; a road diet is on the table for North Palafox; there’s a concept for a multi-use path along Scenic Highway; improvements and sidewalks are being planned for Summit Boulevard, as well as near the Woodland Heights Community Center; and work on Langley Avenue, perhaps a roundabout, will soon be addressed as the city prepares to construct a new soccer complex along the route.

With 5G technology infrastructure coming to the local area, the city is pushing the state to allow the equipment to located on state roads and FDOT infrastructure, such as traffic signals. Currently, the state disallows such, but it would significantly decrease the amount of infrastructure that communication companies will need to position on residential property (which they are allowed to do).

“It could potentially move things out of neighborhoods,” Robinson said Monday.

Last week, the mayor and City Administrator Chris Holley ventured to Panama City to speak with local officials from around the state gathered for a Florida Association of Counties meeting. They spoke with them about approaching the state legislature together and pushing for the 5G logistics change.

“We went and talk to some of our friends at the counties, trying to see if maybe they’d be receptive to cities, counties and the industry going back and asking to be able to put things on DOT poles,” the mayor said.

Robinson said that ideally the state would give local governments control over the issue of where to locate 5G infrastructure, but that he didn’t expect that to happen unless a lot of citizens spoke out on the issue.

“Potentially, it could be, but it’s really going to take some citizen involvement,” he said. “We could pass a number of resolutions, I can go over there in my position, it really doesn’t matter, it’s when they start getting a lot emails and phone calls from constituents that will change their opinion of what happens.”

In an effort to foster better police-community relations, and have officers out in the neighborhoods in a less intimidating fashion, Mayor Robinson has been a proponent of restarting bicycle patrols for the Pensacola Police Department.

“My goal is to get those bike patrols back out,” he said Monday.

Bike patrols had previously been cut back, but following an incident in July in which a police officer shot and killed a citizen during a traffic stop, the mayor has pushed for measures aimed at improving the relationship between police officers and the communities they work in.