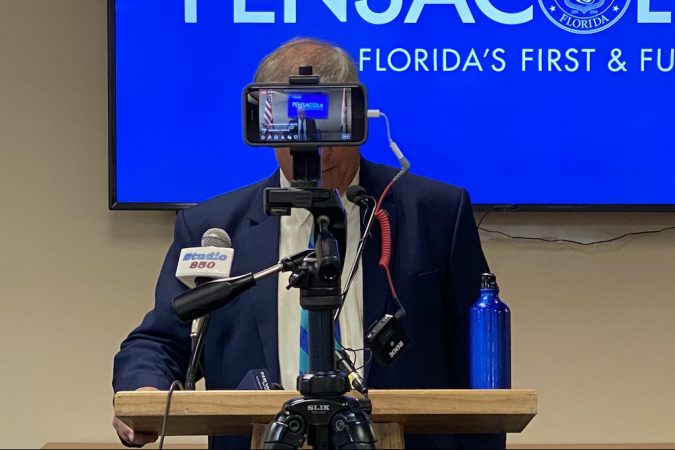 With two meaty items falling on the Pensacola City Council’s table this week, Mayor Grover Robinson used his regular weekly presser Monday as a platform to launch into a monologue that might well have been titled “Pick Your Priorities, We Can’t Do Everything.”

The first issue that the city council will be considering this week involves potential developments on parcels four and five at Maritime Park. A deal from Carson Lovell is on the table — one that differs from previous pitches in that it involves no private funding — and the mayor is recommending that the council reject it.

“It’s a case where it looks for us to put a significant amount of public investment into Maritime Park, with really no source of revenue,” Robinson said. “Not that it was not very interesting, but at this point, we don’t see how we’re going to fund it.”

This Maritime deal has been brewing for a while. The second issue council will consider a pretty fresh, coming in the form of a last-minute add-on item from City Councilwoman Jennifer Brahier.

Brahier is asking the council to look at the city’s franchise agreement with Gulf Power Company (Florida Power and Light) and further consider taking over such operations — in other words, establishing a publicly-owned utility. Robinson said that the city has long been haggling with Gulf Power over the deal — “I thought we were close to a franchise agreement four or five months ago, but then that sort of went sideways,” — but called throwing the issue in front of the city council as an add-on item to the regular agenda “crazy.”

“It will be a fairly significant change within the community,” Robinson said of potentially shifting to municipally-generated power. “I think a change of that nature is not an item, necessarily, that comes on as an add-on.”

Mayor Robinson allowed that while other cities have successfully shifted to a municipal power model, for Pensacola to consider such would require numerous and lengthy discussions.

“If we ever make decisions, we need to make decisions with eyes wide open,” Robinson said. “I’m not saying it’s impossible to do power generation, but it’s not as easy as simply saying, ‘Oh, this is going to be great.’”

The mayor’s chief concern appeared to be the economics of such a consideration. He paired the possibility of expending funds to take over an electric utility with the council’s consideration of the Carson-Lovell deal at Maritime, which includes a roughly $20 million parking garage, and said juggling the two big-ticket items simultaneously was unrealistic.

“I think the city needs a plan going forward,” Mayor Robinson said. “I mean, all the money can’t be flowing out for every single thing we want to do.”

1 thought on “Presser Notes: ‘Every Single Thing We Want to Do’”