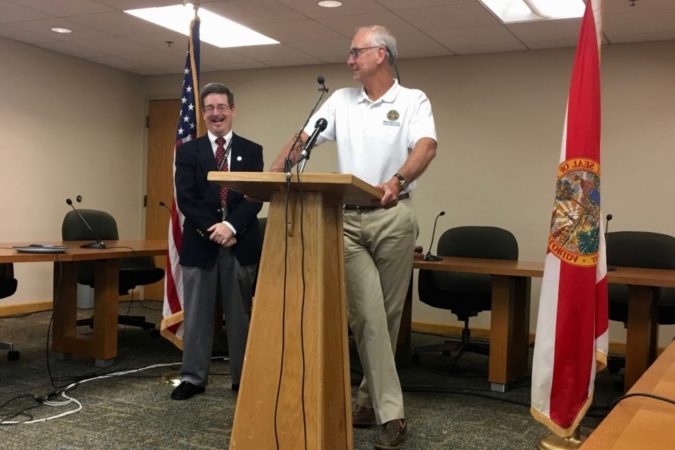 In addition to giving updates on a number of inside-the-building matters — like recent hires and the creation of a new HR manual — and a glowing growth report from the airport, Holley also talked about the issue of meeting ADA requirements for posting content online.

Holley is leaving his post later this year, likely early December. On Monday, he ticked off a list of updates and also spoke about some things he’d like to do before he takes off.

“With about 90 days to go I’ve still got things that I want to get done on the team building front.”

Insofar as team building, the city’s administrative staff will be taking an offsite retreat to a ropes course in Santa Rosa County. Holley said he’d participated in such retreats elsewhere and that they are helpful in “building trust” by having them collectively participate in activities “they’re not real comfortable doing.”

“It’s part of breaking down barriers and it is designed to be a little awkward and put people in situations where they have to develop trust,” he said.

Before the staff’s fall retreat, there’s work to be done at city hall. By October, staff hopes to have a more fleshed out version of the city’s mission and values statement before city council. Council recently approved a general mission statement that was generated during an earlier workshop, and staff has been diving into more detail as of late.

“What I call meat on the bones,” Holley. “So, taking that high level document that the council approved and adding ideas about what we need to do to accomplish the big things.”

The administrator explained that staff had created “boxes,” representing various legs of the city’s mission and vision statements.

“We’ve got in each box, I don’t know, 10 ideas about what it takes to create good neighborhoods and what does it take to create public safety and protect the environment.

It’s the to-do list to get to where we want to be — ‘these are good ideas,’ but how do we get there?”

Holley also said that while staff is putting the so-called “meat on the bones” on the city’s mission statement, their work should be viewed as a living document. City council, he said, would need to periodically review it.

“It’s a work in progress,” He said. “That will be a constant changing document, because priorities change and all that kind of stuff. If you do it right you have at least one workshop a year, generally leading up to the budget process, where you sit down with council and go ‘here, here’s what we’ve been doing and now if you want to redirect us and change our priorities then that’s fine.’”

The city administrator also spoke Monday about a couple of developments on the Human Resources front. First, the city has revived it’s long-missing human resources manual and, secondly, a new HR director is coming on board soon.

Insofar as the manual goes, Holley said it cleaned up some administrative contracts — the previous administration made a practice of hiring on contract — and also created a process for employees who have a complaint.

The new HR manual is actually tied to recently realized contracts with the collective of unions representing city employees, including police officers and firefighters. Holley said that the agreements will allow the city to begin enacting a performance-based pay system for employees.

“All of our employees will participate in that process,” the city administrator said.

As for the city’s new HR director, Ted Kirchharr, he starts Oct. 7. The new director has previously worked within the school district, as well as with the Studer Group. Holley describe him as a “coach” and “trainer.”

“He has a good mix of public and private sector work,” the administrator said. “I just think he brings a number of the skillsets that we were looking for in an HR director.”

The next high-level position the city will be hiring for will likely be an assistant administrator position currently held by Keith Wilkins. That’s because Wilkins, who’s expected to retire next summer, will be stepping into Holley’s role as administrator by the end of the year.

“When I leave, he’ll step up,” Holley said of Wilkins. “And I’m thankful for that. I think he’ll do a great job. He has a lot of experience in the community, he knows all the players.”

Holley said that his intention is to staff assistant-level positions so that the city has a pool of employees to draw from when needing to fill top slots upon retirings. Recent examples of this include the city’s hiring of Amy Lovoy as assistant budget director with an eye on CFO Dick Barker’s retirement, and bringing on Matt Coughlin as Airport Director Dan Flynn prepares to exit.

“We’re building your bench team, having talent that can step up and manage is a commitment that we’ve made,” Holley said. “We want two strong deputy administrators, and when the time comes for the administrator spot you have talent there you can look at. And if you don’t feel they’re ready, you go outside and bring somebody in.”

The city will also probably soon be hiring for a deputy police chief to work under Chief Tommi Lyter, who’s currently on family medical leave and is expected to retire sometime soon.

“I think it’s time for us to begin recruiting for that position and be in a position, when Tommi decides to step down, of having an opportunity there,” Holley said.

One of the bright spots in Monday’s presser involved news about the Pensacola International Airport. In August, the airport broke the two-million passenger mark for this year.

Airport Director Dan Flynn was present at the press conference to offer the details. He gave the credit for the airport’s growth to the regional economy.

Flynn said that the region’s three economic drivers — business, tourism and the military — are responsible for the airports numbers. And the numbers have been looking good for a while. The director reported that every month since October 2017 “has been a record in one form or another.”

“It’s either been a record for that month, or it’s been a flat-out all-time record for passenger traffic,” he said.

Flynn also offered some context. In 2007, the city saw 1.6 million passengers. Last year, it broke 1.9 million. Last July was the first time the city topped 200,000 in a single month. This year, it’s seen more than that for four consecutive months, since May.

As an aide during Monday’s press conference, during a discussion about cell phone tower locations, Holley discussed the city’s issues meeting American Disability Act requirements when posting content to the city’s website.

“All local governments have been challenged, so it’s not just us,” he said.

The administrator said that in recent years, local governments have leaned toward releasing all manner of material on government website in an effort to provide citizens with information and maintain transparency. However, not everything that gets posted online meets ADA standards.

“Because of ADA requirements we have challenges like everyone has with content on our website,” Holley said. “If you can’t make it accessible to handicap folks, then what’s happening more often than not is that the information we’re providing is decreasing because of our challenges with ADA accessibility. There’s a lot of local governments that are being sued, and we were.”

Currently, Holley said, local governments are awaiting some word from the federal government on how best to meet ADA requirements, which traditionally mandate that all ‘reasonable’ efforts be made to make material accessible.

“It’s always been ‘reasonable,’ you’re suppose to be ‘reasonable,’ so because of the lawsuits there’s a new line, so we need some clarification,” he said.

Asked if such ADA challenges ultimately had a “chilling effect” on government transparency efforts, the administrator conceded that it likely did.

“To answer your question, I think that has had a chilling effect of free flow of information because of that challenge,” Holley said.