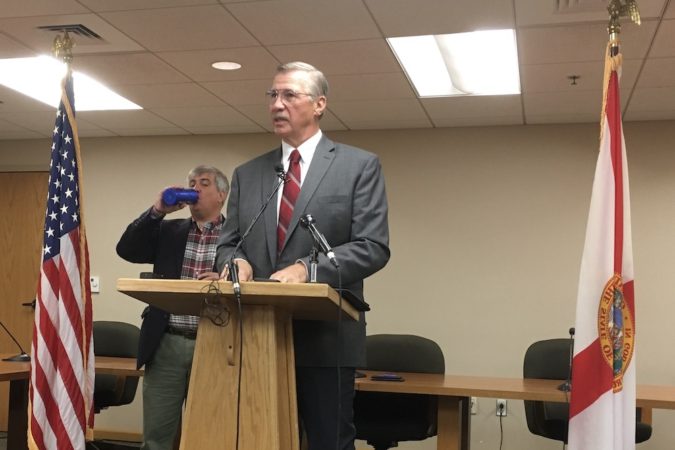 Monday’s mayoral press conference was a split-screen affair. While the primary issue facing the city at the moment is recovering from a recent cyber attack, there was also an announcement regarding a new phase of development for the city’s jobs-project aviation maintenance campus at the Pensacola airport.

Project Titan
The city of Pensacola has been working towards a four-hangar maintenance repair and overhaul (MRO) facility at the airport for years. Dubbed Project Titan, the $260 million project currently has one hangar complete and the city’s tenant and corporate partner in the project, ST Engineering is ready for more.

On Monday, Mayor Grover Robinson announced that work on phase two of the Titan project will soon commence.

“We’re glad to have hangar one, but we’re ready to get two, three and four going,” Robinson said.

The remaining work at the airport will run $210 million. The funds are coming from a collection of sources including $66 million in oil spill recovery money from Triumph Gulf Coast. The city is also still working to secure a remaining $4.8 million for the project.

“We need this space, we need this growth, the opportunity is there,” Hafner said, joining the mayor for Monday’s presser at Pensacola City Hall.

Hafner relayed promising projections surrounding the aviation industry, particularly the MRO sector. He detailed how air travel, both passenger and freight, is on the rise and is expected to continue to grow. Meanwhile, major aircraft manufacturers are looking at 10-year-long backorders on planes.

“I can tell you right now, FedEx and UPs, two of our largest customers — everything that’s got wings is flying, because they have all those boxes coming into the country for Christmas,” Hafner said. “Many of our customers are bringing equipment out of retirement, they’re taking things out of mothballs and putting them back into service because the manufacturers simply can’t get new equipment out there fast enough.”

What this means for the MRO industry is expanded opportunities because older aircraft are being brought out of retirement to meet the demand.

“It all trickles down, folks, and those planes need to be maintained,” Hafner said.

Hafner said that once the MRO campus at the Pensacola airport is completed, the company will need approximately 1,700 employees to fill maintenance and other positions. With an eye towards that need, the company is partnering with local schools, like George Stone and Booker T. Washington High School, to train students for the industry.

“As far as locating folks down here, there’s been great response. In fact, we have a much easier time recruiting and hiring in Pensacola than we do in our other locations,” Hafner said.

Cyber Attack
Last week, Mayor Robinson announced that the city had been the target of a cyber attack. Since then, the city has largely recovered communication capabilities, as well as other city functions, and is currently working to get fully back on line.

While the city has confirmed that the attack involved ransomware, officials have been otherwise tightlipped about the specifics surrounding the attack. That trend continued Monday, with the mayor citing an ongoing investigation as the rationale for not elaborating.

“We cannot discuss specifics of the attack,” Robinson said.

Some apparent details regarding the attack have emerged though. A FDLE email surfaced briefly online and confirmed the use of the MAZE malware, and also a cyber security blog reportedly made contact with the cyber attackers responsible for the attack and confirmed the ransom ask was $1 million.

Mayor Robinson would not confirm or discuss any of these points on Monday.

“I can’t confirm anything,” Robinson said, explaining that the investigation into the attack is ongoing. “We’ve been advised by those that are investigating this not to discuss details in the press.”

The mayor would also not say if the city had communicated with the hackers.

“I think they’ve reached out to —“ the mayor said, before PIO Kaycee Largarde interjected.

“That would be part of the investigation that we can’t talk about,” Lagarde said.

The mayor said that the city had not been able to figure out if any personal or private data belonging to residents or customers of the city had been compromised in the attack.

“We believe they were not, but again we can’t confirm that,” the mayor said.

Officials have engaged an outside tech firm, at a cost of $140,000, to assess the post-attack technical landscape at the city. The city will also be pursuing insurance to cover any future cyber attack events.

New Team Members
Also announced during Monday’s presser was the hiring of new staff members. In addition to bringing on a new public information specialist, the city has hired a new risk manager.

Ryan Fitzgerald started work at the city this week as risk manager. Fitzgerald comes to Pensacola from Layette, La., where he served as risk manager for the Diocese of Lafayette. His first assignment will be looking into cyber security insurance options.

“I’m sure cyber insurance is going to be the first thing he looks at, so we’re ready for him to get on board and take a look at that,” Mayor Robinson said.