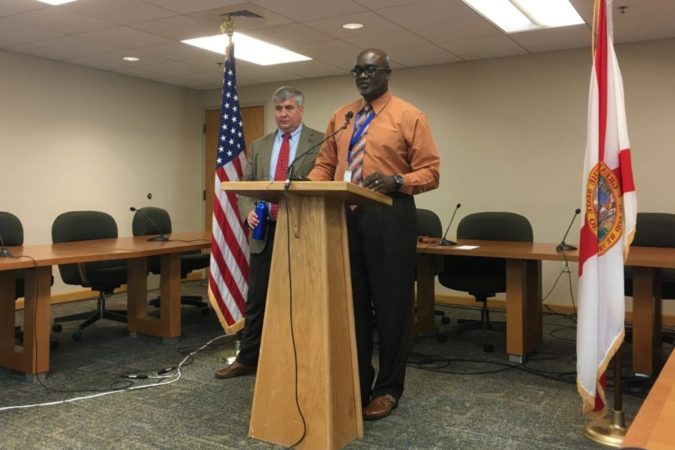 Pensacola Mayor Grover Robinson used his weekly press conference leading into the Thanksgiving holidays to announce some changes for the city’s sanitation department, and also fielding a few questions about a city council members recent claim of sexism.

John Pittman, the city’s new sanitation administrator, hasn’t been on the job too long. But he’s already identified some changes he wants to make in an effort to make the department’s operation more efficient.

“We ask for good ideas to come forward from our people. We look to hire good people here and then look for ways we can be better at what we’re doing,” said Mayor Robinson said Monday. “John came to me with an idea that is some change, but I don’t want us to be afraid of change.”

The changes that Pittman has suggested involve shuffling residents’ pick-up days. Instead of the city picking up trash one day, recycling another day and yard waste a third day, now all three types of pick-ups will be done on the same day.

“These changes will streamline our operation and make sanitation services more efficient,” Robinson said. “I know it’s going to be change, but I ask that everybody have some patience with some change.”

These changes to city sanitation routes will not take effect until Jan. 6. Prior to that, city residents will be receiving a postcard detailing the changes. When the changes do go into effect, customers will begin getting all waste picked up on the day they traditionally put their trash cans by the curb; customers who currently have their trash collected on Friday will be moved to Wednesday.

“Now you don’t have to figure out which day your recycling goes out and your garbage goes out,” Pittman said. “Now you know everything goes out on the same day,”

Pittman said that one of the reasons for the changes involve fleet maintenance logistics. Once the changes are implemented, the sanitation department will have the weekend to upkeep vehicles.

“Going forward we will be doing the best job that we can to make sure we’re providing the highest level of service out there,” Pittman said.

“I think her allegations are valid from her perspective, the was she looks at it,” Robinson said. “At the same time, this was not a lodged at the city as a whole or our employees and that’s what I focus on.”

Robinson said he had not heard any other allegations of sexism and that he did not intend to act on Myers’ allegations in some way.

“We’re looking forward and not looking behind,” he said.

Councilwoman Myers lodged her complaint at the same time she was expressing interest in the taking the council president position. However, Myers subsequently withdrew her name from consideration and skipped Tuesday’s special council meeting, during which Councilwoman Jewel Cannada-Wynn was elected president and Councilman Jared Moore was elected to the vice president seat.