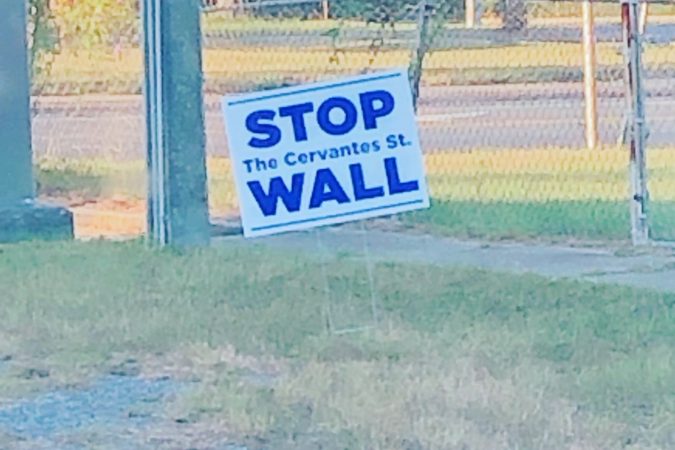 PENSACOLA–After breaking the ice with some warm-up announcements concerning UWF football, the seafood festival and a sailing league, Pensacola Mayor Grover Robinson got into the meat of his weekly press conference Monday morning, which included go-rounds on the barrier slated for East Cervantes Street, the prospects of 5G cellular towers popping up around town and also the city’s efforts to partner with area arts organizations in an effort to offer arts opportunities to the city’s youth.

The Florida Department of Transportation is planning safety improvements along a stretch of West Cervantes to address the issue of pedestrian and vehicular accidents along the route. In addition to traffic signals, crosswalks and lane narrowing, the agency is also planning to install a barrier down the middle of the street to prevent people from crossing the street except at designated crossing points.

Residents, area businesses, as well as both the city of Pensacola and Escambia County have come out against the wall. They contend that such a structure is an uncreative solution and one that will cut off connectivity and flow in the area.

FDOT, thus far, has not budged on its wall concept. Mayor Robinson said Monday that the city is continuing to discuss the issue with the agency in hopes of finding another way.

“I look at West Cervantes as like a river, it runs through there,” Robinson said. “So, if you’re a pedestrian you need a bridge.”

The mayor likened pedestrians crossing the street wherever they pleased to swimming across a river. A crosswalk, he said, stepped it up to a rope bridge. But, what we need, he continued, is a safe, sturdy stone bridge.

The mayor conceded that perhaps such a number of traffic signals weren’t warranted, but that they would serve to create a safer route without resorting to such blunt tactics as a fence or wall in the middle of the road. He also said additional signals would spur economic development in the area.

“Where you have stop lights, you will have good neighborhood, residential, commercial,” he said. “I think if we see more lights there we’ll see more economic opportunity.”

Robinson said he did not know if FDOT would be receptive to the concept of additional signals and dropping the wall, but that the city would continue to push the issue.

With the 5G technology coming down the pipes, communications companies are scrambling to throw up the appropriate infrastructure, which means more cell towers. In Florida, these companies are allowed a lot of leeway in where they can put their equipment, meaning that some residents may find a tower being placed in their yard.

Mayor Robinson said Monday that the city had met with a number of representatives from Verizon, and that efforts were being made to alleviate the shear number of poles that would be placed on residential properties.

“We told’em one of the biggest things they could do is just attach it to traffic signals,” Robinson said. “If we could find ways to put the equipment there, it would move it out of neighborhoods, it’d move it out of parks, and it’d get it into regular roads that have traffic signals. We think that would be a win-win all the way around.”

Unfortunately, the state legislature has prevented the infrastructure from being placed on FDOT equipment. And pretty much all the traffic signals in Pensacola are found on state roads.

The mayor said that he would be speaking to both the Florida Association of Counties and the Florida League of Cities in an effort to bring the issue to the state in a unified nature, requesting that the equipment be allowed to be located on FDOT traffic signals.

“If they think it’s great for local governments, counties and cities, I’m yet to understand why they don’t think it’s good for DOT,” he said.

Health concerns associated with cellular tech and 5G was also touched upon. Robinson brushed aside such concerns, saying that cell phones had become too intertwined with the culture to turn back now.

“We live by these. This is a choice that we’ve made in our life and I don’t know that we can go backwards because of what we do with our phones,” he said. “Do say I fully understand the health concerns? No, I don’t. Do I worry about that? Yeah, I do, but … It is just the challenge of where we are between technology and life.”

The Value of the Arts

On Sept. 18, the city held an arts night at the Wedgewood Community Center. Various arts organizations were in attendance and citizens were able to help begin developing a plan to engage some of the organizations in providing arts programs in coordination with the city.

The mayor said that he thought giving the city’s youth opportunities to immerse themselves in various artistic pursuits would have value beyond honing their artistic skills.

“We believe arts is vitally important,” he said.

The city is still awaiting surveys completed by participants, but judging by audience engagement, organizations like Pensacola Children’s Chorus and Blue’s Angles Music received a lot of interest.

Robinson said that he hopes to get the city’s arts efforts underway during this school year.

“The goal is that those that had interest are going to start doing some regular programming at Woodland Heights,” Robinson said, adding that other community centers may also participate in the program.