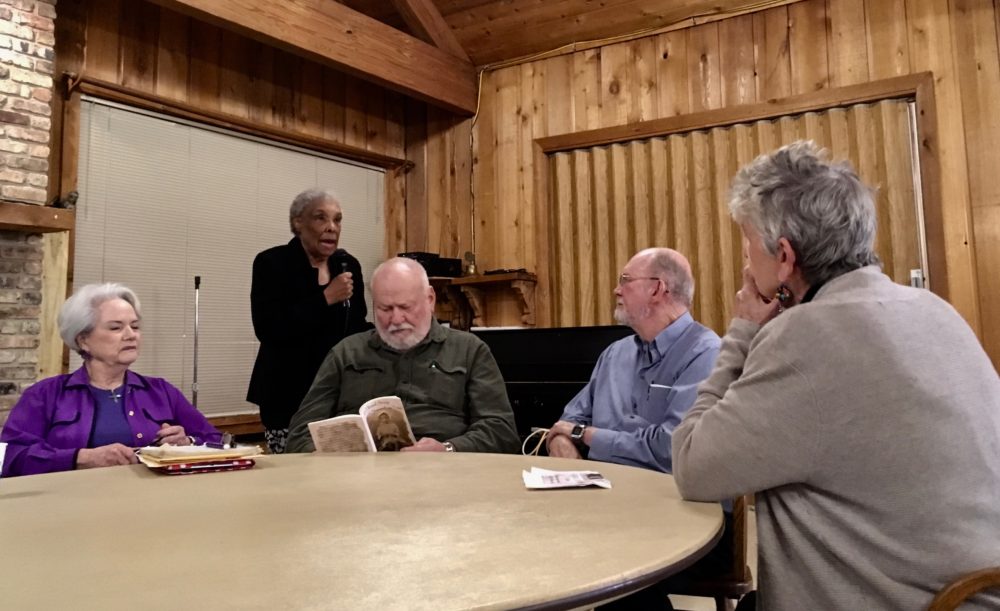 –Ora Wills paints a vivid picture of living near Carpenter’s Creek before that area of Pensacola was developed into the landscape of malls and hospitals and big box stores that it is today.

“Sometimes I still dream of walking up and down that strip past Carpenter’s Creek and being in those woods and sometimes stretching out on that grass and going to sleep,” Wells said.

Wills, in addition to other longtime Pensacolians who recalled the former glory of Carpenter’s Creek — when the water ran wider, deeper, and the banks were not eroded from clear cutting — participated in a town hall event Tuesday evening, recording a verbal history concerning the creek and providing a peek at the creek’s potential as restoration efforts on the body of water that flows into Bayou Texar and the Pensacola Bay continue.

“For us to restore it we kind of need to know what it looked like, what it was like before humans started destroying it through development,” said Pensacola City Councilwoman Sherri Myers, who was joined at the town hall by Escambia County Commissioner Robert Bender.

Later in the evening, Emerald Coastkeeper Laurie Murphy would provide an overview of restoration efforts aimed at cleaning Carpenter’s Creek of silt and debris, but the night’s main event was the collective of storytellers seated around a table at the front of the hall in Asbury Place at the Cokesbury United Methodist Church. Each relayed memories of living and playing on the creek, of swimming in deep pockets that no longer exist, of running through wild woods that now live as naked, paved parking lots allowing stormwater runoff to wash clearcut banks into the water.

Wills — a retired local educator and author of the book “Fishhead Soup and Sassafras Tea” — talked about a time when Carpenter’s Creek provided a place to both work and play. A place to swim, to cool off from the summer’s heat, as well as a place to gather for baptisms or to wash the laundry.

“They were not only washing their own clothes, but they were washing white people’s clothes,” Wells recalled how her family would work at the creek.

The trek to the creek for young Wells was short. Just a quick walk through the woods. As a child, she visited it often.

“My grandfather would say ‘stay away from down there,’ but I wouldn’t listen,” Wills said.

“Aunt Jenny had a bunch of beehives in the trees up from the creek,” recalled E.B. Williams.

One day Williams thought it’d be funny to turn the hives over. He thought he’d gotten away with it, too, until he returned home from his venture down to the creek.

“There sat Aunt Jenny on the back stoop talking to my dad,” Williams said. “We knew then we were in trouble.”

“Every time we had a softball game,” he said, “when we’d get through we’d go down to the water and take a swim.”

“We would go through that clay pit to the most beautiful, pristine creek, it was called Jenny’s Hole,” Norman said, describing a thriving swimming spot — “we had swings and logs, you name it, diving boards.”

“We use to swim down to these two logs and put a watermelon underneath to keep it cold,” recalled Boyce Crawford.

Gary Bedgood talked about an ill-fated expedition across the then-deeper Carpenter’s Creek.

“I read somewhere you could float Volkswagens, that they could float,” Bedgood said, before describing how he attempted to float a VW Beetle across the creek in 1957 and discovered the vehicle indeed sinks. “All I could see was the top of it.”