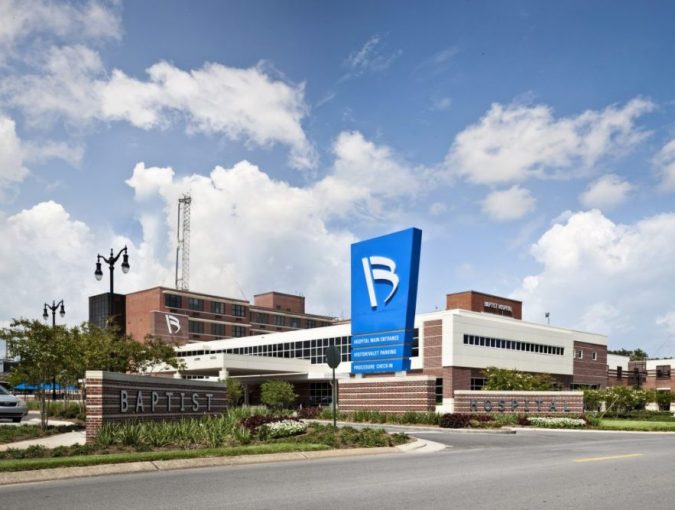 Five years ago this week, Richard Martz of the Montreal-based Live Work Learn Play revealed the concepts on how Baptist hospital would redevelop the 25 blocks it owned in the West Moreno District.

“It has a lot of broken teeth,” Martz told about two dozen residents of the area at Friendship Primitive Baptist Church on Blount Street. “We need to improve that. It’s not going to take care of itself.”

Martz added: “How do we finally jump over E Street and invest and improve the area westward? We need to stop the deterioration.”

Live Work Learn Play envisioned an office building to house Baptist administration on the top floors and retail on the ground floor. It would also include green space for the surrounding poor and majority-black residential community to enjoy.

“This project has an opportunity to be a real catalyst for this area that has deserved attention for quite some time,” said Martz.

The idea was for West Moreno to become the next great Pensacola district, “characterized by a world-renown hospital anchor, diverse living options, a broad mix of retail services and amenities, and an active and accessible public realm that invites pedestrian activity.”

The September 2015 presentation made to the Committee of the Whole touted, “It will be a catalyst for the resurgence of Pensacola’s Westside, and emblematic of the culture of historically African-American neighborhoods.”

The vision for the Live Work Learn Play project was for “the new development at West Moreno and “E” Street to be a catalytic project for both Baptist Hospital and the surrounding neighborhood, and a national model for the hospital-anchored civic
revitalization efforts. It will be a safe and inclusive gathering place that physically and experientially integrates Baptist with its surroundings, and improving the quality of life for employees and residents with diverse retail amenities and an active urban environment.”

By June 2019, the Live Work Learn Play plan that attracted so much attention was off the table, and Baptist announced it was leaving the West Moreno District and would build a $615 million campus near I-110 across the street from Pensacola Christian College. The new facility is expected to open in 2023

Two years since the announcement, we have no plan in place for what will happened with the abandoned site. An advisory committee exists but not much more.

For the Black community, yet another plan that received plenty of public input, publicity and fanfare has been forgotten. The commitment to “Next Great Pensacola Neighborhood” has faded with health care anchor moving, and the deterioration has continued.