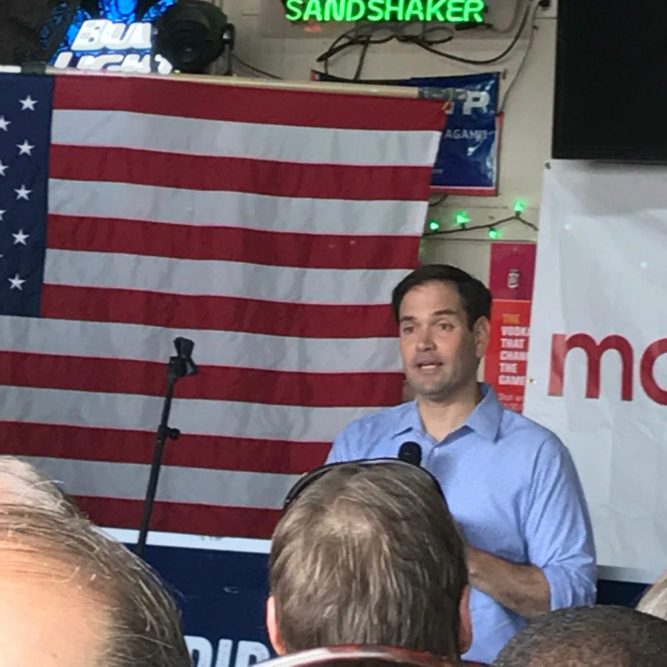 U.S. Senator Marco Rubio made a campaign stop at The Sandshaker Lounge on Saturday. His focus was to urge his supporters to get out the vote and remind them that Florida is the key to the Republicans maintaining control of the Senate.

His mission was positive and inspirational. When some in the crowd shouted that they might leave the country if Trump lost the presidential race, Rubio discouraged such talk.

“Our nation can survive bad presidents,” he said, but jokingly added, “but may not too many.”

After his speech, Rubio shook hands and took selfies with anyone who wanted a photo. He met briefly with the media before heading to Panama City.

He is confident that he will be re-elected, but he is campaigning hard.

“We feel great about our campaign, but most of the polls show us winning,” said Rubio. “We don’t believe polls. We keep working hard. Polls aren’t the same as ballots. Florida’s a competitive state. We always knew that. It’s not a state you’re going to win by 10 points, not in a Presidential year.”

Rubio said that he chose to get in the Senate race because the country needs the GOP to maintain its majority in the upper chamber.

“Losing the Senate would mean having Chuck Schumer as the majority leader, and then no matter who’s President, the Supreme Court is not going to go the way I think it should,” he said. “You can change bad laws. I’m not in favor of bad laws, but you can always change a bad law. You lose the Constitution, you can’t get that back.”

If reelected, how will he stop the gridlock that’s happening in D.C?

He continued, “I’m willing to work with anyone to do what’s right, but what I’m not going to compromise on is my principles. There are some issues where we’re probably going to have to have an election over things like Obamacare and the future of the Supreme Court. That’s what’s at stake in this election.”