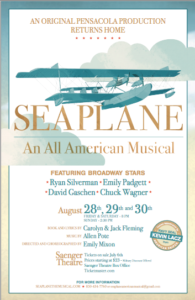 Press Release: Seaplane, An All American Musical is pleased to announce the cast for the performances at the Pensacola Saenger Theatre, August 28 through 30.

The Seaplane cast will feature Broadway stars in the lead roles including David Gaschen as Glenn Curtiss, Ryan Silverman as Jack Towers and Emily Padgett as Katie Stephens, Jack Tower’s love interest. Silverman and Padgett were recently seen in the Broadway hit production of “Side Show” and Gaschen is best know for his role as the Phantom in Broadway’s “Phantom of the Opera.” Playing Alexander Graham Bell is Broadway star Chuck Wagner (living in Pensacola, Fla.) whose credits include the Beast in “Beauty and the Beast” and Javert in “Les Miserables.” There is a cameo appearance by Navy SEAL, Kevin Lacz, who was recently seen in the film “American Sniper.” The cast also features talented actors from Pensacola in the remaining roles.

The musical features book and lyrics by Carolyn and Jack Fleming with musical score by Allen Pote and direction and choreography by Emily Mixon, all of Pensacola, Fla., the cradle of naval aviation and where the second act is set. Originally written in 1989, Seaplane has been performed more than 50 times collectively in Pensacola, Fla., Hammondsport, New York, and at the Kennedy Center in Washington, D.C., and is now being revived after two decades.

“Seaplane” is the dramatic story of the first crossing of the Atlantic in 1919 by the NC-4 aircraft. It chronicles the historical characters of Glenn Curtiss, the aviation pioneer who built the aircraft, and Jack Towers, the naval aviator who led the expedition. The story portrays the ingenuity, perseverance, and courage of the pioneers of early flight – it also focuses on the love story behind a man’s ambition to fly, his desire to make a mark in history, and a woman’s fear of the risks he must take to do so. The music is uplifting, inspirational, and moving, as proven in the lyric from the final song…“Together, we can build a dream. To build a dream takes more than one of us and even then, we may never know just where or when the dream will end. We stand on the shoulders of dreamers before us, together we can build a dream.” The acclaimed critic, Charles Champlin, of the L.A. Times said, “SEAPLANE is “Music Man” on wings. I went a second consecutive time because I’m a glutton for pleasure.”

Seaplane performances will be at the Pensacola Saenger Theatre on Friday and Saturday, August 28 and 29 at 8 p.m. and on Sunday, August 30 at 2:30 p.m.

Tickets are available for sale at the Saenger Theatre Box Office and on Ticketmaster. There is a military discount offered. For more information, please contact seaplaneamericanmusical@gmail.com or visit the website at www.seaplanethemusical.com.