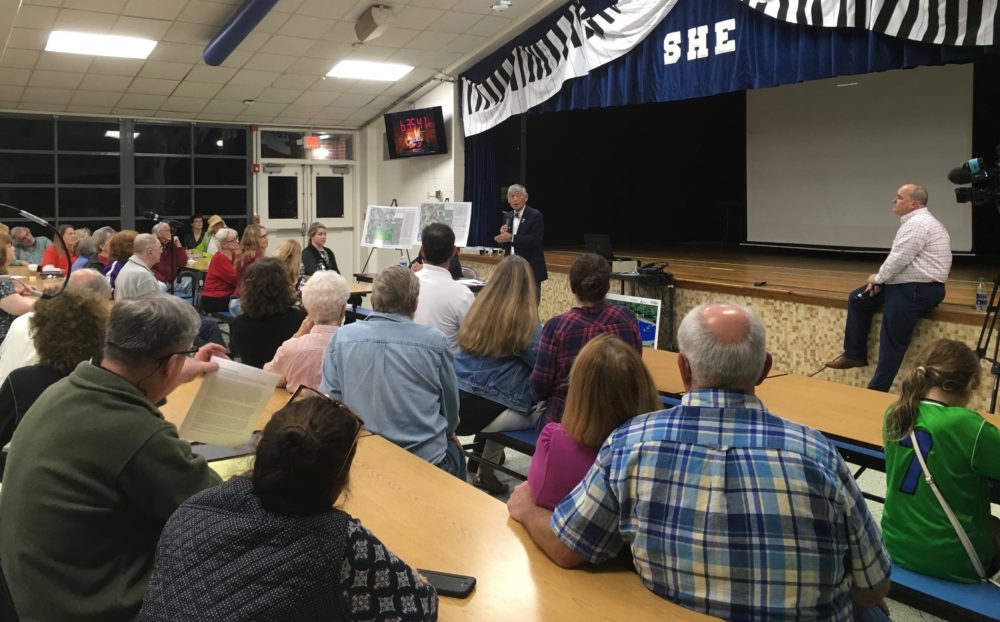 –The debate over a proposed youth soccer complex off of Langley Avenue played out again Thursday night during a community meeting with city officials. Pensacola Mayor Grover Robinson noted the emotionally charged atmosphere at the meeting’s onset, requesting civility.

Last fall, city council decided to explore the concept of striking a deal with the YMCA on Langley that would see the city inherit the organization’s property and the Y move over to the Vickery Center, where it already manages a city pool. The city would then be able to pair the Y’s property with a portion of its neighboring Hitzman Park and construct a three-field complex for the city’s growing youth soccer league.

A number of Scenic Heights neighborhood residents, however, have pushed back since learning of the city’s plan. They contend that the city should have notified area residents of the proposal and are now asking city officials to reconsider the project location.

Thursday’s community meeting served as a forum for city officials to explain updates to the proposed project aimed at appeasing neighborhood concerns, such as increased traffic, loss of trees, as well as noise and light pollution.

“We want you to be happy when the project is done,” said Parks and Recreation Director Brian Cooper. “We think you will be happy.”

But, so far, critics don’t seem too much happier with the updated project than they did with the original. During the community meeting, neighborhood residents expressed concerns about: the cutting of any trees at all, the loss of the YMCA and its services, potential changes to the existing features of Hitzman Park, and the increased traffic the complex would bring.

Both Cooper and Mayor Robinson said they intended to engage the public in an ongoing process aimed at addressing neighborhood concerns with the project. They also floated some fixes and potential solutions to a few of the concerns: the city could consider a deed restriction to protect trees from future expansion at the park, and it may be able to swing a deal that would allow the two old tennis courts behind the former Pensacourt property to be used for overflow parking, and maybe one of the new fields could be left unlocked for public access.

“There’s a long way to go on this project,” said Cooper. “This is the concept.”

Aside from the notion of the project itself, residents also expressed concerns regarding the process by which the city decided to move on the Langley Avenue location. They wondered why initial plans for locating the complex off of Summit Avenue were scuttled in favor of pursuing a deal with the Y. And they wondered how long such plans had been discussed (Cooper would confirm serious discussion have been going on for about a year) and why the public wasn’t brought into the conversation sooner.

Young Penelope Emerson questioned the city’s assertion that the project plans had been available on the city website.

“I don’t know why if it was on there then on one saw it and got to think about it and have this conversation earlier,” she said to the mayor.

Mayor Robinson employed a recurring reply to numerous commenters over the course of the evening, noting that he only recently came into office and was not on the scene when the project was developed or when city council approved negotiations with the YMCA.

“All the things that you say ‘y’all‘ — I was not there,” Robinson explained.

While accurate, the clarification didn’t play well in the cafeteria.

“Please do us all the service of not saying you weren’t here,” said Krista Hobgood. “Because you represent us all now.”

Mayor Robinson wasn’t the evening’s only target of neighborhood ire. City Councilman P.C. Wu, who represents the area, was also taken to task.

“You’re silence and lack of response has us feeling unrepresented by you,” said Melissa McKnight. “Where do you stand on this proposal?”

Leaving his seat in the back of the cafeteria, Councilman Wu pointed to the city’s need for additional soccer fields and said he supported the project. He also bemoaned what he described as “a lot of disinformation” and noted that the park would be receiving upgrades, like new bathroom facilities.

“My kids grew up in Hitzman Park,” Wu said, explaining he lived nearby. “That park is very dear to me.”

Toward the end of the meeting, resident Beverley Collier posed an interesting question. She wondered what would happen if the city and YMCA nixed any potential deal. Would the YMCA remain as is, or would the organization put the property onto the market and open the door to an unknown future?

“If it goes on the market, then who knows, we could be fighting a Taco Bell or Fast Eddies,” Collier said.

Will Y stay in Scenic Heights?

Michael Bodenhausen, Northwest Florida YMCA CEO, had stood silently against the side wall of the cafeteria for the entire meeting. But now a question begged answers only he could provide.

“It just makes sense,” Bodenhausen weighed in on the potential deal publicly for the first time.

The CEO spoke about how the Y could benefit from moving to the Vickery Center, and about how the concept of some sort of land-and-services swap had been kicked around for years, well before either he or Cooper revived the discussion.

“This is not something new,” Bodenhausen said, explaining how he’d first heard of the concept nine years ago upon coming onto the job. “All we have done is continue that conversation.”

Bodenhausen explained that the YMCA had been doing market research, which revealed a couple of interesting data points: some of their services overlapped city services — “it’s silly” — and of the facility’s 600 members, only five resided in Scenic Heights.

“You also have to understand,” he said, “the Y doesn’t belong to Scenic Heights. It belongs to Pensacola.”

Bodenhausen also addressed the question about the Y’s future on Langley regardless of any potential deal with the city. He said the organization was squeezed for space at the location and would have to cut trees down in order to remain — “if it’s trees, you don’t want the Y there, because I’ve got to get rid of tree, it’s very tight” — but said staying put wasn’t very likely, as the facility on the property had long since “outlived it’s usefulness.”

“It is tired,” Bodenhausen described the Langley YMCA. “There’s no doubt about it, something will happen.”