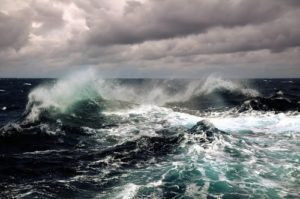 A sudden gale storm caused a tragic end to the Dauphin Island on Saturday afternoon. Just as the boats were finishing the race a “wall of rain and wind” hit the racers and those watching the race in their boats.

As of this morning, two people have been confirmed dead. U.S. Coast Guard officials report five people are still unaccounted for and believed missing in the waters of Mobile Bay. Ten boats were capsized or incapacitated when the storm hit around 4:30 p.m. Saturday. Three of those were registered in the regatta.

The captain of one 17-ft sailboat that barely avoided power lines and got trapped against the Dauphin Island Bridge reported this on his Facebook page:

All 5 of us are safe. We are the boat that was hitting the bridge.

In a nut shell. We finished well. We made it around 300 yard past DI bridge. (just were its gets narrow and goes from 30 ft to 2 feet deep in a blink of an eye). We saw a wall of white water coming at us a few hundred yards away. Pure white wind and water. I’ve never seen any thing like it.

Well we started getting the sails down, but in the amount of time to stand up and walk to the bow. The storm hit. and hit hard. Id say 60 knots + . Our little 4 hp motor couldn’t push us forward and with the main still up, we basically slid sideways. Well we slid into the 2ft section of water just outside of the channel.

We had to heel over massively to pass under a set of power lines. because we were defiantly going to put the rig into them.

After that we started prepping for safety. Anchor, life jackets throw cushions, ditch bags, etc. etc. Well during that, the rudder broke off and sank. The motor turned sideways and went underwater, rendering it useless. {As if it was helping at all.}

We blew sideways across the oyster beds and into the DI bridge. the anchor caught but didn’t hold. The head stay broke,as the mast continued to bang into the bridge to where, I Knew it was coming down.
Then we were sideways about to be smashed into a bridge leg. Which would break the boat in half.
But we were lucky and the wind slack down to around 40 knots. which allowed the current to hold us off the bridge and allowed time for the Coast guard to get us off the boat.

Big thanks to Kevin Uteg, Johnny Madison, Frank Stickney and Kendra Utsey. They all worked together very well to secure the boat and kept their wits about them in the face of this disaster.

I pray the lost sailors are found alive and hopefully well. As this tragedy is very sobering for us all.
My prayers go out to those that have suffered far worse than us…..

Here is a portion of a GoPro video posted on YouTube by Joshua Edwards that was taken on board a sailboat during the Dauphin Island Regatta.