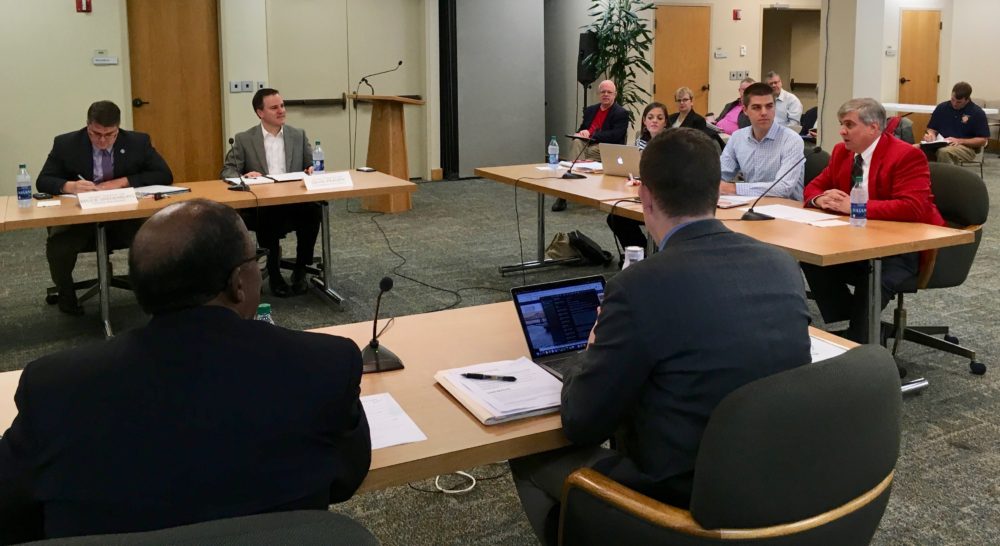 –A couple of themes emerged out of Thursday’s meeting of Pensacola Mayor Grover Robinson’s transition team. One, was the overlapping nature of the team members’ work. Another was the clinical efficiency that the team’s chairman, Quint Studer, intends to move the process forward toward a March finish line.

On that latter front, the team’s staff laid out a detailed timeline counting down to completion. The team now has dates to work with. In addition to several public input meetings, members can mark their calendars for these key dates: public meetings have to be wrapped by Jan. 25, with draft reports due Jan. 31 and final reports due by Feb. 21.

“We want to find things that we can truly implement effectively and will make city government better.”

Studer asked team members to particularly focus in their reports on issues that Robinson could immediately and feasibly address.

“We want to find things that we can truly implement effectively,” agreed Robinson, “and will make city government better.”

The mayor’s transition team — tasked with assessing various areas of the city government and its relationship to the community — has been at work a few weeks now. And as members began detailing their work in their specific area’s of assignment, it became apparent that there were instances of overlap occurring; that must have already been obvious, though, as the topic was on the day’s slated agenda.

Specifically, the group has found that multiple team members —each assigned areas like governance, environment and education — will be digging into the same material, such as health related input, or public safety statistics.

To address this issue, members decided to schedule topical meetings covering common areas of crossover. Meetings will address issues such as education, health, walkability, public safety, etc. Additionally, the team’s staff said it intended to begin building time into the group’s regular meetings to address specific topics in order to solicit feedback on that issue specifically.

Reports From the Field

During the Dec. 13 meeting, transition team members detailed the work they have conducted thus far in their respective fields of focus, as well as their plans moving forward.

Government Efficiency — David Peaden reported that he had been meeting with city staff, who had provided him with helpful information and institutional knowledge.

“We’ve got good people in the city,” Peaden said. “They know a lot of history. What works and what doesn’t work.”

After speaking with various members of staff in various department, Peaden said he had zeroed in on communication, both within and between departments, as an area to focus on.

Finance and Budget — Bruce Vredenburg said had continued to meeting with the city’s financial staff, and also intended to schedule several public meetings focusing on specific topics. These type meetings— covering things like the airport, port and Pensacola Energy — the team later determined could potentially be blended into more collective meetings.

Environment — Christian Wagley reported that he had been meetings with Assistant City Administrator Keith Wilkins, and also attending several public meetings covering environmental concerns. In January he is planning to speak to the city’s Environmental Review Board, who recently oversaw the release of the city’s climate task force’s report.

“Doing a lot more listening than talking,” Wagley said of his work so far.

Governance — Kristie Tobias said she had been speaking with city staff and identified several areas to look into: employee engagement and retention, as well as leadership development.

Crime and Safety — Connie Bookman told the team about meeting with members of the police and fire departments. She has met with each department head and also with individual members. She’s also scheduled a public meeting for Dec. 29 with the Police Chief Tommi Lyter and Fire Chief Ginny Cranor.

Legal — Julie Sheppard reported that she had met with city staff and was digging in to what the mayor has identified as a particular area of concern. “I have a lot of reading to do,” she said.

Economic Development and Entrepreneurship — Brian Wyer said that he was meeting with area economic groups, such as Florida West, and also community groups, like neighborhood associations. He also said that he was starting to identify the area of health to be pertinent to economic development, and additionally invited his team mates on a tour of the city’s port that he was currently planning.

Studer told Wyer that he thought a particular area of his focus should be the group currently overseeing the allocation of funds related to environmental fines from the 2010 oil spill in the Gulf of Mexico.

The Triumph Gulf Coast board recently issued the city a deadline extension on some potential funding related to a jobs-based project at the airport, and was less than enthusiastic about a second project pitching a marine technology research center for the port.

Studer requested that Sheppard, who works with the locally-based Institute for Human and Machine Cognition, outline the marine research project that the Triumph board passed on. The project — being put forward by IHMC, the city, Escambia County and the University of West Florida — proposes creating a research center focused on marine innovations.

“Our proposal was a way to try to create high wage jobs in an industry that doesn’t’ really exist here,” Sheppard said. “To put Pensacola on the map as a place that we do that kind of work.”

Both Sheppard and Mayor Robinson said that the $50 million project, which is seeking to get $15 million in Triumph funding, needed to be reframed to the Triumph board, stressing that its research based jobs — as opposed to a higher number of jobs associated with more tradition ventures —should be seen as valuable and potentially having ramifications with exponentially bigger payoffs.

“They’re use to looking at X and we’re giving them Y,” Robinson said, explaining that he thought Y — in this case representing research-based jobs — should be thought of as equally valuable as a more traditional job.

The mayor painted the research effort and its associated jobs and other benefits as good for the city, saying that such an establishment was“vital for the future,” would “propel the area forward” and help establish it as a research-and-tech-rich locale.

“Yeah,” Studer agreed, “Whoever has the talent is going to win.”

Sheppard said she thought the project could potentially make it back before the Triumph board for their consideration on the other side of theNew Year.

“The proposal is very much alive,” Sheppard said. “I think that we’re very much on the table.”

Studer noted that northwest Florida doesn’t currently have anyone from the area representing its interests to the board: “I would encourage anybody that is able to do so reach out to the governor and ask him to make that appointment.”

Education — Michelle Salzman reported that she has met with various members of the local education community, including officials with UWF,Pensacola State College and the Escambia County School District, and various community groups.

Salzman also keyed in on some overlap, telling the team that the subject of health had come up during conversations with PSC President EdMeadows. The two had discussed the potential to involve the local educational institutions, as well as local hospitals in coordinating regular and revolving clinic days at the city’s community centers.

Neighborhoods — Rev. Dr. Isaac Williams said the areas of concerns he was hearing from input gathered seem to be consistent: sidewalks ,street lights and stormwater. He also said he planned to solicit feedback door to door, and was planning a Jan. 3 public meeting concerning area neighborhood groups.

Traffic and Walkability — Drew Buchanan told the team about a recent experience with a faulty parking meter downtown, pointing to the removal of faulty equipment as an easy thing to address.

“I do think there are some quick ones,” he said.

Mayor Robinson said that parking was the one thing he heard consistent complaints about. Studer noted that a recent CiviCon speaker had dubbed the city’s parking as “the worst parking system in America.”

In addition to hearing from the mayor, City Councilwoman Sherri Myers, and a representative coordinating neighborhood efforts, the transition team also heard from Nathan Edler, president of the Pensacola ProfessionalFirefighters union.

The union president said he wanted to address comments previously made during a team meeting regarding firefighters’ pensions.

“At the fire department,” Edler said, “our pension is our baby. It’s something we fought hard for.”

Edler told the team members that firefighters had forgone a raise to maintain their pensions, which he said were 94 percent funded. He also noted an uptick in people leaving the department following the city’s pension reforms in 2015.

Robinson told the team that he agreed that the firefighters pensions looked good.

“That’s amazing to have your pensions funded at that level,” the mayor said.