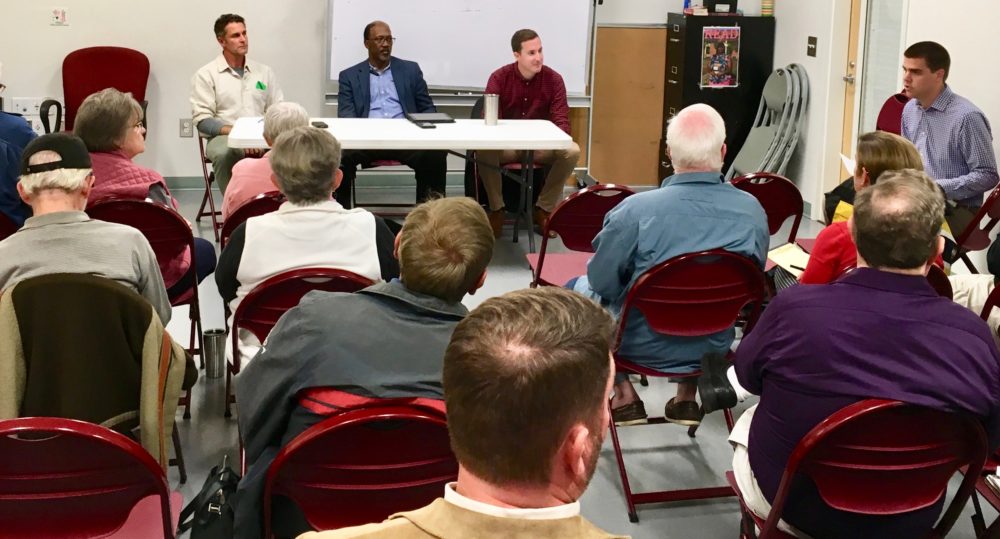 Three members of Pensacola Mayor Grover Robinson’s transition team hosted a joint public input session Monday at the Theophalis May Resource Center at Legion Field. With each member tasked with exploring a different area of municipal function, the session focused on three such areas: walkability/biking/traffic, the environment and neighborhoods.

Christian Wagley, the transition team member exploring environmental issues, explained the rationale for the combined session at the onset: “There’s a lot of overlap.”

The small meeting room at the community center was packed to the gills with people interested in offering their thoughts on how the city could better its services as they relate to the environment, neighborhoods or pedestrian concerns.

“Nothing is off the table, anything you want to discuss.”

Issac Williams, the team member studying neighborhood relations, urged attendees to provide some “low-hanging fruit” examples of ways to improve the city, but also told them to them to think as big as they’d like.

“Nothing is off the table,” Williams said, “anything you want to discuss.”

Most people were interested in speaking about walkability-related issues, but the topics did drift into the waters of environmental and neighborhood concerns.

Offering a good example of the overlap between these three areas — as well as others, such as public safety, which the team is assessing — James Gulley suggested that the city replace the existing lighting at community centers with LED lighting.

“That’s all of it rolled into one,” he said.

Gina Buchanan, president of the Scenic Highway Foundation (SHF), told the transition team members that she would like to see concerns about safety issues for walkers and bikers along Scenic Highway. She suggested the creation of a walking/biking path.

“Casual bicycle riders and walkers do no use Scenic Highway very much,” Buchanan said, “and I think it would be wonderful for the community if we had a bicycle-pedestrian path.”

“We’re thinking about this walking, biking trail at the bottom of the bluff,” Rowan said. “People just drive up and down it and say, ‘Oh yeah, nice view, nice bay.’ But no one ever sees the bluffs. Scenic Highway is such a unique place. We would love to see more done with it.”

Amy Miller, director of the Port of Pensacola, explained that rail lines weren’t needed, but only in a hypothetical “perfect world” where the lines — which provide a route to the port — were relocated. Miller described actually accomplishing such a task as a “transformative project” with “big, hairy, audacious goals.”

Another attendee — Steve Dana, of Jerry Pate Design, who has worked previously with the city on landscaping projects — said that Pensacola needed to pursue Complete Streets, a planning philosophy that emphasizes pedestrians over vehicular traffic.

“I think that Complete Streets would really, really help us do the things we want to do to make our neighborhoods more walkable, healthier and safer.”

“I really think that is a really simple, easy way to almost codify what we’re trying to do here,” Dana said. “I think that Complete Streets would really, really help us do the things we want to do to make our neighborhoods more walkable, healthier and safer.”

Another individual at the meeting floated the idea of potentially renting a fleet of scooter s downtown.

“I know, it’s an idea that everyone is going to love: having scooters all over the streets,” joked Chris Jadallah.

Jadallah, a Pensacola-based filmmaker, said he first experienced urban scooter use in Detroit, and thought the concept might work locally.

“I actually kind of laughed when I first saw one,” he said, “and then I got on one and I said, ‘Oh, this is actually really great.”

This transition team input session was part of a currently ongoing series of public input sessions focusing on a number of subjects. For more information, visit transitionpensacola.com