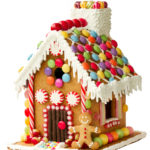 After almost a month of a beautiful gingerbread display in downtown Pensacola, the first SOGO Gingerbread House Contest is coming to an end, but not before you have the chance to vote on your favorite.

During the gingerbread display, holiday shoppers have been voting for their favorite gingerbread houses, but that opportunity is almost over. People’s Choice and Fan Favorite voting will end Tuesday, December 16, at noon.

“We have had such an incredible turnout for the fan favorite voting,” says project manager, Daniel Pennington. “It will take at least a day just to count out all the tickets.”

The Fan Favorite voting has raised over $800 in ticket sales. All the proceeds will go to benefit the Health and Hope Clinic, a not-for-profit organization that provides health care services to the uninsured in our community.

Tickets, being sold at 25 cents a piece, means there are over 3,200 votes out there among the 45 gingerbread houses. With that many votes, it’s anybody’s guess who will be the People’s Choice and Fan Favorite winners. The two winners will receive prizes of $500 and $1,000.

All winners of the 2014 SOGO Gingerbread House Contest will be announced at an awards ceremony Wednesday, December 17, 2014.