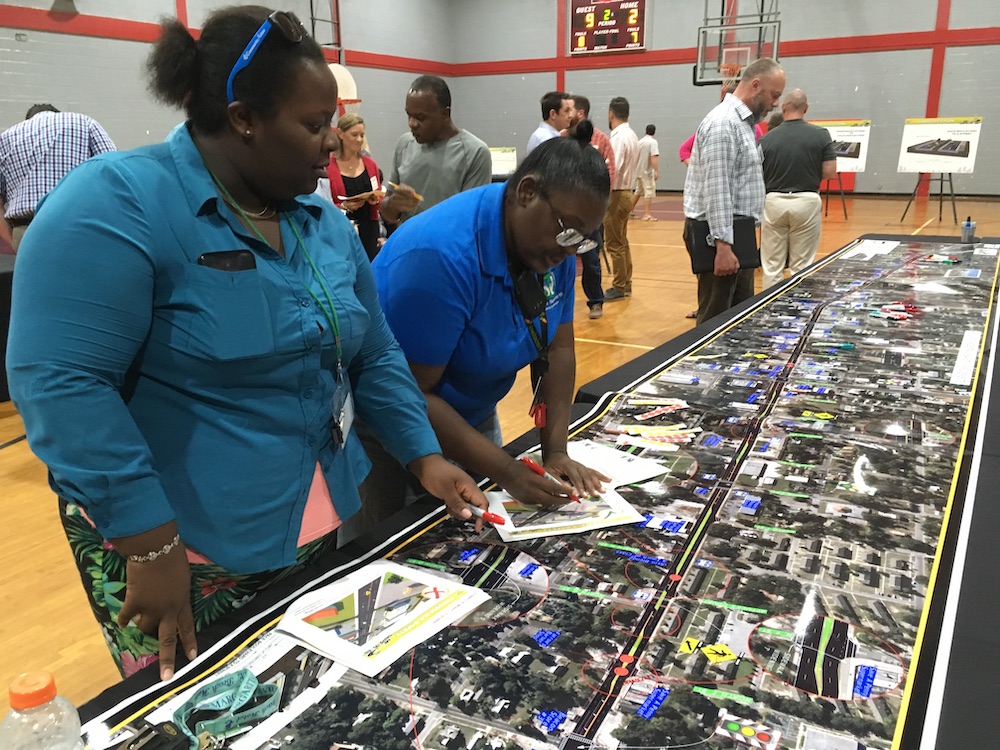 FRICKER CENTER — The West Cervantes safety improvements on display Tuesday in Pensacola were slightly different from plans presented during a workshop earlier in the summer. Notably, the revised plans featured red circles at a number of intersections, where openings had been created in a median running down West Cervantes to allow for through traffic and crossing opportunities.

“We’ve added some additional median openings,” said Ian Satter, pointing out the new breaks on an enlarged map of West Cervantes laid out on a table in the gymnasium of the Fricker Community Center.

The state is planning to $7.5 million on safety improvements for West Cervantes, a route that has proved dangerous to pedestrians and vehicular traffic. The West Cervantes Pedestrian Safety Plan encompasses 2.3 miles of roadway, from Dominguez Street to A Street, and work is scheduled to begin in the fall of 2020.

The slated safety improvements include added traffic signals and crosswalks, as well as a median, potentially topped with a fence-like barrier, running down the middle of the street to prevent improper pedestrian crossings and act as a barrier between directional traffic lanes. The improvements also involves reducing lanes from 12 feet to 10 feet.

The Fricker center event was the second in a pair of summer presentations FDOT has hosted to allow the public to get a look at the proposed improvements. Plans presented during the first event featured a barrier with far fewer brakes, limiting the cross streets drivers could turn onto and forcing pedestrians to walk blocks to reach an intersection where they could cross the street.

During that meeting, Satter had explained that the unbroken median was key to improving safety — “this is safety, safety, safety” — but on Tuesday he explained that a total of seven new openings in the center median had been added as a result of feedback received during the earlier meeting. FDOT, he said, is attempting to incorporate concerns about access and the number of crossing opportunities while still emphasizing safety.

“Safety is always going to outweigh that, but we’re trying to find compromises,” Satter said. “It’s a balancing act.”

Pensacola Mayor Grover Robinson, in attendance at the Fricker center workshop, said the city still has issues with FDOT’s proposed improvements—“there are things we still have concerns with”—such as the number of added crosswalks and traffic logistics, and is currently working with the agency in hopes of seeing further revisions.

“We’re working on it, know what I mean?” Robinson said, adding that he’d recently discussed the project with FDOT officials. “We met with them the other day and said, ‘We like some things, other things we’d like some flexibility.”

While the workshop on Tuesday was the last opportunity for the public to comment directly to FDOT, input may still be submitted via mail or email through August 27. Comments can be emailed to Tommy.Johns@dot.state.fl.us.

The public will also have another opportunity to comment on the West Cervantes project later this fall, specifically about the additional median breaks. Satter said that because the revised plan opens up additional breaks in the center median—carrying concrete changes to access—FDOT is required to conduct formal public hearings.