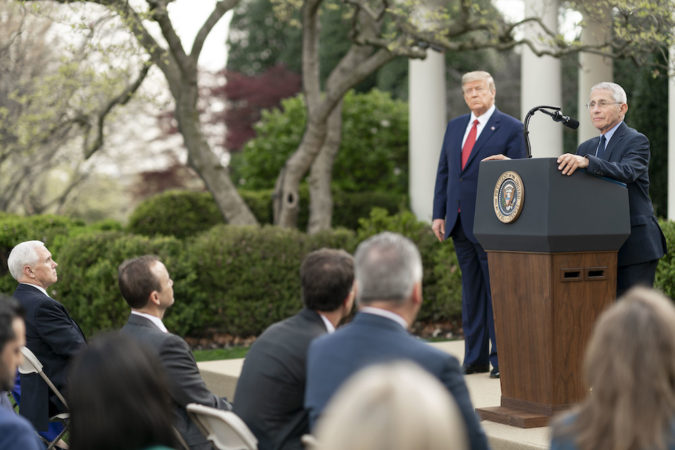 The Escambia County Commission will vote tomorrow whether to re-open the county’s public beaches. Commissioner Doug Underhill wants them open and also has advocated in a mass email rolling back Gov. Ron DeSantis’s executive orders regarding restaurants and boating.

Commissioner Lumon May has said he won’t vote to reopen the beaches unless local health leaders recommend doing so. At his virtual “Coffee with the Commissioner” this morning, Commissioner Jeff Bergosh said he will listen to the experts. Commissioners Steven Barry and Robert Bender have no made public statements.

At his Tuesday press conference, President Donald Trump let his top health experts present the models his administration has used to make its decisions regarding COVID-19.

Dr. Deborah Leah Birx, coronavirus response coordinator for the White House Coronavirus Task Force, said they have used five or six international and domestic modelers, such as those from Harvard, Columbia, Northeastern and Imperial College of London.

“In their estimates, they had between 1.5 million 2.2 million people in the United States succumbing to this virus without mitigation,” said Birx.

She warned, “There’s no magic bullet, there’s no magic vaccine or therapy. It’s just behaviors. Each of our behaviors translating into something that changes the course of this viral pandemic over the next 30 days.”

Dr. Anthony Fauci pointed to Birx’s graphs that laid out the impact of mitigation efforts.

“As I’ve mentioned several times in our briefings, the virus if left to its own devices will do that dark curve that Dr. Birx showed you,” he said.

“Now these are very revealing bits of data because you saw what happened in Italy, where you make the turn around the curve and you go. That doesn’t happen all at once. It’s a stepwise fashion. And if I explained the steps, which I will, you’ll see why we are really convinced that mitigation is going to be doing the trick for us.”

He said for the next 30 days are not the time to “take your foot off the accelerator and on the brake, but to just press it down on the accelerator.”

“People are suffering, people are dying,” said Fauci. “It’s inconvenient from a societal standpoint, from an economic standpoint to go through this, but this is going to be the answer to our problems.”

He continued, “So let’s all pull together and make sure as we look forward to the next 30 days, we do it with all the intensity and force that we can.”