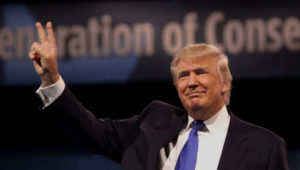 Before its Pensacola rally, the Trump campaign sent out a press release on its local endorsements.

Mr. Trump stated, “It is my great honor to receive endorsements from each of these incredible people. Their support for my message and endorsement of my candidacy for President of the United States means so much to me, and with their help, and the help of so many great people in Florida and all over the country, we will Make America Great Again!”

Here are the short bios that the campaign released:

George Scarborough, Pensacola resident and brother of former Congressman and TV personality Joe Scarborough, is the owner of Scarborough Consulting and regional Director of The Studer Group.

Clover Lawson is a founding partner of Lawson & Palmer, LLC. Clover is one of the foremost women in the firearms industry and represents world class competitive shooters, as well as some of the best manufacturers in tactical gear.

Capt. Allen Brady served 32 years in the US Navy including 4 years at the US Naval Academy and 6 years as a P.O.W in Vietnam’s infamous Hanoi Hilton.

Terry Busbee Sr. served multiple tours in Vietnam before moving into politics. Seeking real and positive change for America, Busbee is leaving the Democratic Party to endorse Donald J. Trump for President because ‘he’s the smartest man for the job’.