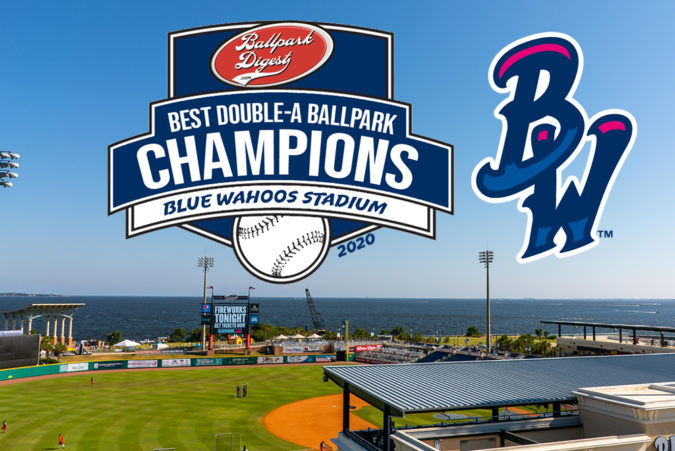 PENSACOLA, FL – Pensacola’s Blue Wahoos Stadium was named the 2020 Ballpark Digest “Best of the Ballparks” champion at the Double-A level on Wednesday evening, earning the title through a national fan vote that attracted over 80,000 votes. The five-round competition featured all 30 Double-A Minor League Stadiums in a single-elimination bracket decided by fans. Pensacola won the title of Best Ballpark by besting “Hodgetown”, the ballpark of the Amarillo Sod Poodles, an affiliate of the San Diego Padres and the 2019 Best of the Ballparks champion, in the championship round.

“We’re very excited to bring the title of Best Ballpark back to Pensacola,” team president Jonathan Griffith said. “Our mission as an organization is to improve the quality of life in our community, so it’s an honor for us to bring this recognition to our city. While we’re proud to have a great ballpark, we’re even more proud to have such incredible fans who voted us to the title.”

Pensacola’s road to the title included a win over Bowie’s Prince George Stadium in the opening round, victories against Biloxi’s MGM Park and Montgomery’s Riverwalk Stadium, both Southern League opponents, in the second and third rounds, a tightly contest win against Corpus Christi’s Whataburger Field in the semi-finals, and a resounding 54%-46% win in the championship against Hodgetown.

“Despite all the bad news, the Blue Wahoos ownership and management have responded with verve and imagination, refusing to let down their fans,” Ballpark Digest publisher Kevin Reichard said in a release by the publication. “The win in the fan vote against such a tough foe really shows how loved the Blue Wahoos are in the community.

Built in 2012, Blue Wahoos Stadium has established itself as one of the nation’s premier facilities over the past decade, winning three Southern League Ballpark of the Year Awards and previously winning the Ballpark Digest Best of the Ballparks contest in 2016. A multi-use community ballpark, the stadium hosts over 200 events each year including Blue Wahoos games and University of West Florida football games.