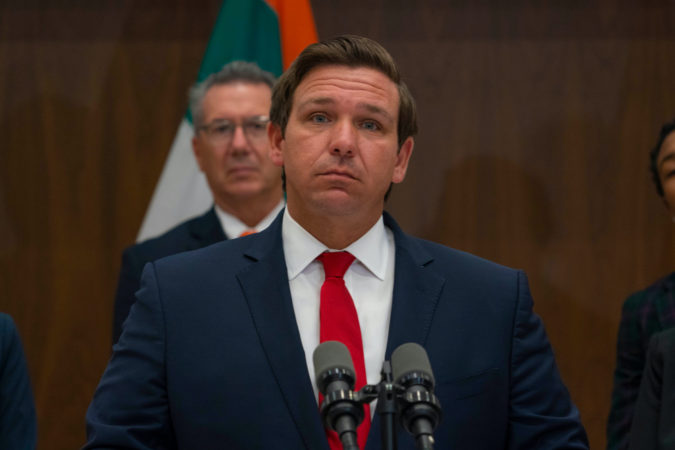 At his press briefing on Monday, Gov. Ron DeSantis said the state would step up its support of long-term care facilities infected with the COVID-19 virus.

“Today we are raising the bar even further,” said the governor. “I am directing the Florida National Guard to create more strike teams to significantly ramp up testing in longterm care facilities.”

He added, “We are going to expand that to have 10 teams of four, and we’ll probably expand it beyond there as long as we have enough equipment and PPE, and they will begin their mission in the counties that are being most affected by Covid-19, so primarily in Southeast Florida.”

The National Guard teams are the state’s largest testing effort in long-term care facilities and comes weeks after a federal Centers for Disease Control and Prevention report found that COVID-19, the respiratory disease caused by the coronavirus, “has the potential to result in high attack rates among residents, staff members and visitors” after being introduced into facilities, the News Service of Florida reports.

The decision to increase testing came as the cases involving long-term care residents or staff members reached 962 on Monday morning. In all, 53 of the 67 counties had cases in long-term care facilities.

By 6 p.m. Monday, the cases in nursing homes increased to 1,090 statewide, a jump of 128 cases. Of those 128 cases, 10 were in Escambia County – bringing the county’s total to 39. Last Tuesday, the county only had eight COVID-19 cases involving long-term care residents or staff members.

The News Service of Florida reported last week that the Suwannee Health and Rehabilitation Center in Live Oak was the source of a cluster of infections in the North Florida community.

A Live Oak City Council member told the News Service that he worried about the staff and residents.  He said, “I don’t want to be like the place in Seattle on TV every night where they start hauling them out of there, dead.”

Inweekly had hoped Escambia County officials would follow the lead of Live Oak and name the highly-infected facility, but instead, the county has directed the media to DOH-Escambia and the state surgeon general to identify the nursing home.

The PIO for DOH-Escambia declined: “FDOH-Escambia is unable to comment regarding naming the facility of confirmed COVID-19 cases. Every epidemiological investigation is unique, both in nature and circumstance. Rule 64D-3.036, Florida Administrative Code, provides specific guidance, and states that all information contained in epidemiological investigations is confidential as provided in Section 381.0031(6), F.S., and will only be released if determined as necessary by the State Surgeon General.”

Inweekly sent an email to the state surgeon general and asked him to identify the facility. We have not received a reply.

It should be noted that the Live Oak city councilman who identified the infected facility in Suwanee County was not arrested, publicly chastised or fined. The governor later had to detail what was happening at the facility at a press briefing. The citizens of Suwanee County learned why their cases had spiked.

Inweekly has asked DOH-Escambia whether any of the National Guard strike teams have been assigned to Escambia County. We are waiting for a reply.

The News Service of Florida reports that DeSantis repeatedly noted throughout the Monday news conference  that hospital admission rates have been “flat” for the last week. He also noted that more than 40 percent of the state’s hospital beds are empty.

“We’ve worked very hard to make sure our hospital system would hold up over this period,” DeSantis said. “Right now, the hospitalizations are basically flat. That’s a good sign, but we look at it one hour at time. one day at a time, and we just keep trying to do the right thing.”

However, State Surgeon General Scott Rivkees–the one who has replied to our email– said Florida residents might be social distancing and wearing facemasks for a year because of COVID-19.

“Until we get a vaccine, which is a while off, this is going to be our new normal and we need to adapt and protect ourselves,” said Rivkees, who is also the Florida Department of Health Secretary.

There is no vaccine to prevent infection with the novel coronavirus, which causes the deadly COVID-19 respiratory disease. Anthony Fauci, director of the National Institute of Allergy and Infectious Diseases, and other experts maintain that a vaccine won’t be available for another 12 to 18 months. When Rivkees was asked to explain how long the “new normal” could last, he said it could be “probably a year, if not longer.”

State Division of Emergency Management Director Jared Moskowitz said Monday the anticipated peak of the COVID-19 outbreak in Florida has been moved back in a forecast model from April 24 to April 26.

“We continue to watch the models as new data is gathered and prepare accordingly,” Moskowitz said during a news conference at the Capitol with Rivkees and Gov. Ron DeSantis. The Institute for Health Metrics and Evaluation at the University of Washington School of Medicine had initially put the peak at May 3, basing its forecast on the influx of cases and hospital capacity, along with state and national public-health data and information from the World Health Organization.

During an emergency meeting Monday for the Pinellas County Commission,  a majority of the seven commissioners said they wanted information for a Thursday meeting so they can consider opening parts of the county’s beaches for exercise and recreation, according to a report in the Tampa Bay Times. The commission will hear from the Pinellas County sheriff and municipal leaders across the county before making any decision.

Last week, Escambia County Administrator Janice Gilley said she would look at video of Cocoa Beach, which has allowed exercise and recreation its beaches. She also said, “I have been trying to look at Georgia and South Carolina, as I understand they’ve also opened some of beaches this past weekend with similar restriction.”

The administrator suggested that lifeguards, code enforcement and animal control officers would enforce the amended policy.

It will be interesting to hear what lead agency – FDOH-Escambia – recommends.

TALLAHASSEE — In a bitter legal dispute between local officials and oceanfront property owners, a federal judge on Monday refused to block a Walton County ordinance that bans people from using public and private beaches amid the COVID-19 pandemic.

Plaintiffs in the lawsuit, including former Arkansas Gov. Mike Huckabee, argued that the ordinance is unconstitutional on a series of grounds, including that it violates privacy and due-process rights.

But in a telephone hearing Monday, Vinson said the plaintiffs failed to show that they would be harmed if the ordinance remains in effect and would likely not succeed on the merits of the lawsuit.

“Certainly, this is a national emergency. It’s a state emergency. I think without question the county has authority to take whatever measures they think are necessary to meet that need, as long as it’s narrowly tailored to meet that interest,” Vinson said.

Any potential harm to the plaintiffs is “temporary,” Vinson said, pointing out that the countywide ban on beach use expires on April 30, but is likely to be extended.

“It’s a harm that’s relatively minimal compared to the harms that might result if you have exposure to a communicable virus,” he added.

Much of Monday’s two-hour hearing focused on what constitutes the “beach,” which the ordinance defines as “the soft sandy portion of land lying seaward of the seawall or the line of permanent dune vegetation.”

But most of Walton County’s 26 miles of beaches along the Gulf of Mexico lack seawalls, while some oceanfront properties lack vegetation covering dunes, as shown in photos submitted by the plaintiffs.

Property owners complained in the lawsuit, filed this month, that Adkinson’s deputies, county code-enforcement officers and local fire department workers have bullied them as they tried to use their “backyards.” The case focuses on how the ordinance affects the rights of oceanfront property owners, rather than issues related to the general public.

Local officials maintain they are trying to curb widespread transmission of COVID-19, the highly contagious respiratory disease caused by a novel coronavirus.

“It’s hard to imagine a more important public interest than attempting to prevent the spread of this rampant, unseen pathogen, which can be transmitted … by both symptomatic and asymptomatic persons, and which has led to the deaths of tens of thousands of people and many, many more infections,” attorney Bill Warner, who represents the county, told Vinson during Monday’s hearing.

The county’s lawyers argued in a brief filed Friday that Gov. Ron DeSantis gave them the authority to close beaches. In an April 1 executive order, the governor directed “parties accessing public beaches” in Florida to follow health officials’ social distancing recommendations and “support beach closures at the discretion of local officials.”

The “safer at home” order also left room for people to take part in “essential activities,” including “participating in recreational activities … such as walking, biking, hiking, fishing, hunting, running, or swimming.”

Kent Safriet, one of the plaintiffs’ attorneys, said the Walton County ordinance “increases the risk to the public” of contracting COVID-19 “by forcing these landowners to public locations to engage in the very activities” authorized in DeSantis’ order.

“Your honor, these people cannot swim or fish in their own backyard,” Safriet told the judge Monday.

Safriet said Vinson should follow a Saturday ruling by a Kentucky federal judge, who issued a temporary restraining order against Louisville Mayor Greg Fisher and city officials, prohibiting them from attempting to stop drive-in church services on Easter.

The Walton County ordinance, which carries a $500-per-day fine and up to 60 days in jail, is an “unreasonable seizure” of the property owners’ land and violates their “constitutionally guaranteed right to be let alone from government intrusion,” Safriet argued. Under Florida law, privately owned beach property generally extends to a point known as the mean high-water line.

“They’re being kicked off and threatened with arrest for being on that portion of their dry beach,” he said. “The county has done nothing to establish that this action helps prevent the spread of COVID-19.”

“They all say, if you don’t follow what I say, I’m going to call the sheriff,” Safriet said. “The homeowners don’t want the sheriff coming up to their patio and saying you can’t sit on your patio. I mean, that’s pretty basic.”

“I don’t recall anybody suggesting that the county has attempted to limit their ability to sit on their patio or their deck or whatever,” Warner said.

Adkinson’s lawyer, Gwen Adkins, told Vinson the ability to “limit the spread (of the disease) as much as possible … is what’s at stake here and what is necessary,” adding that “the public interest far outweighs any incidental harm to the plaintiffs, in terms of them not being able to use a portion of the property.”

The issue of beach closures has sparked a furious debate as the coronavirus has spread throughout the state.

DeSantis balked at ordering a statewide closure, but on March 20 agreed to shut down beaches in Palm Beach and Broward counties to combat large crowds of college students congregating. Local officials throughout Florida have imposed beach closures and other stringent measures, such as curfews, aimed at curbing the virus’ spread.

Walton County commissioners voted April 2 to shut the beach. Although Vinson sided with the county, the judge said he was concerned “about the way this ordinance has been interpreted and applied.”

Vinson said he construed the ordinance to apply to “the sandy area between the water and wherever the (property) improvements are.”

Vinson said his decision means “anything that’s perceived as part of the beach, by reasonable people.”