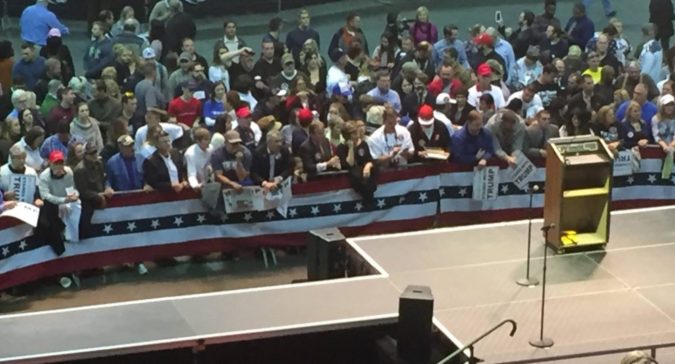 On “Pensacola Speaks” yesterday, Congressman Matt Gaetz said that President Donald Trump wants him included in the “Make America Great Again” rally at the Pensacola Bay Center on Friday, and he expects Roy Moore will come up.

“I’ve been very pleased four times in the past to emcee events and speak at events where the President has been in the state of Florida,” he said. “It will be even more special to have him as the sitting President right in downtown Pensacola.”

Gaetz expects Alabama Republicans to attend the event, and the President will probably bring up Roy Moore’s campaign for the U.S. Senate. Moore faces Democrat Doug Jones in a special election for the U.S. Senate in Alabama scheduled for Dec. 12, to fill a vacancy in the Senate caused by the resignation on of Jeff Sessions to serve as U.S. Attorney General.

In a radio interview last month, Gaetz had said he hoped Moore would withdraw and Session would run for his old seat, but that isn’t going to happen.

Moore’s candidacy still bothers the freshman lawmaker. However, Gaetz believes President Trump sees the Alabama election as being central to his ability to get his agenda passed.

“Look, I’ve said I’d have a real hard time voting for Roy Moore given the things he’s admitted to, but I also understand the importance of this agenda beyond the state of Alabama,” he said. “It’s a tough decision that our neighbors to our west will have to make, and I don’t envy them for it.”

Can’t putting politics over principle be a slippery slope for the GOP?

“No, I agree. Look, I supported and endorsed Mo Brooks, and if I had vote I’d probably write in Mo Brooks, because I know he’s a conservative, but that wouldn’t be a very practical vote,” said Gaetz. “My mother said if I did that I’d be throwing my vote away.”

Rep. Mo Brooks Brooks is a staunch conservative and a member of the House Freedom Caucus. He came in third in the Republican primary with 19.7 percent of the vote.

Gaetz added, “As I mentioned in our town hall, Rick, this was the subject of Gaetz family Thanksgiving discussion.”

The congressman also mentioned the upcoming testimony of FBI director Christopher Wray before the Judiciary Committee on Thursday, Dec. 7.

“We’ve got a lot of questions for him about not only the way that the FBI has operated in the past, which is of great interest to us, but also what reforms we’re going to put in place at the FBI moving forward,” he said. “You don’t have circumstances where normal patterns and procedures are ignored just because you’ve got a high-profile person who’s in the crosshairs of an investigation.”

Last week, Reps. Gaetz, Louie Gohmert, and Andy Biggs sent a letter to Director Wray, asking for an investigation to be launched into the FBI’s treatment of former Secretary of State Hillary Clinton during their e-mail investigation.

“I’ll just tell everyone stay close to what we’re learning about the FBI, about some of the biases we’ve discovered in evidence and emails, about some of the practical changes we need to see at the FBI so that we don’t have people treated in a different way just because they’re political candidate or a national figure,” said Gaetz yesterday. “I think that’s gonna be really important to restoring a sense of confidence in the rule of law in this country.”