On News Talk 1370 WCOA’s “Pensacola Speaks,” State Senator Don Gaetz yesterday said that attempts to redesign the Pensacola side of the new Pensacola Bay Bridge by Mayor Ashton Hayward and his “well-meaning” supporters could put the funding of the bridge at risk.

“I received a phone call for the Secretary of Transportation today who told me that the mayor has asked for an additional study on how the bridge lands on the Pensacola side,” said Gaetz, “and that study could delay the project anywhere from six months to over a year.”

The senator, who terms out of the Florida Senate in 2016, added, “If it’s more than year, I will not be around to protect the funding, and there are those around the state–with projects just as important as a new bridge here–that will try to get those monies.”

In February 2013, Gaetz, who was then the Florida Senate President, traveled to Pensacola to announce a series of $1 billion state-backed transportation projects, including $595.6 million for a new, toll-free bridge across Pensacola Bay.

Gaetz told Inweekly, at the time, “The Department of Transportation has committed to me and committed to our delegation and is prepared to commit publicly that they will begin construction within two years.”

The initial hurdle for the bridge was getting the city of Gulf Breeze and FDOT to work out the right-of-way issues on the Fairpoint peninsula. That was settled this past April. Gaetz thought the everything was in place to award the contracts until he heard from the FDOT Secretary on Tuesday.

The state senator said that Mayor Hayward never contacted him about any changes that the city wanted to make to the bridge. He only recently became aware of the Vision Pensacola initiative and has been told that redesign could add $20-$30 million of costs to the bridge. 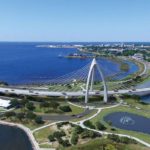 Vision Pensacola has been led by Alan Gray and Steve Dana. They have appeared on BLAB TV and made presentations at transportation meetings in the area. Renderings of their proposal are available on Facebook. Its page has 1,835 likes.

Send your statements of support for the Vision Pensacola Bay Bridge concepts to:

Simply state “I strongly support the Vision Pensacola conceptual improvements to the intersection at 17th Avenue and Bayfront Parkway at the northern landing of the Pensacola Bay Bridge. The project should be prioritized to be constructed in sequence with the Bay Bridge Replacement project.”

Senator Gaetz said on “Pensacola Speaks” that he made several phone calls to Mayor Hayward’s cell phone on Tuesday, but the mayor did not answer his phone. He called the mayor’s office. That call went to voicemail.

“I guess the mayor is a very busy man, but I hope to speak with him soon,” said Gaetz. “He and his supporters probably have the best intentions. I’m just not sure they understand the possible consequences of delaying this project.”

The senator would not identity who are the Hayward supporters that reached out to FDOT about an additional study. However, Inweekly has since learned that Jerry Pate was one of the people who made the trip to Tallahassee to push for the Vision Pensacola Bridge.

Last night, I got an email from Sen. Gaetz, saying that Mayor Hayward had called him after the radio show interview:

“Ashton called me tonight. We had a very, very frank conversation. At the end, he agreed to withdraw his actions that would delay and imperil the bridge replacement. He promised me he would call Sec DOT tomorrow morning and withdraw his request for a delaying study. I will follow up with Sec DOT and get back to you.”