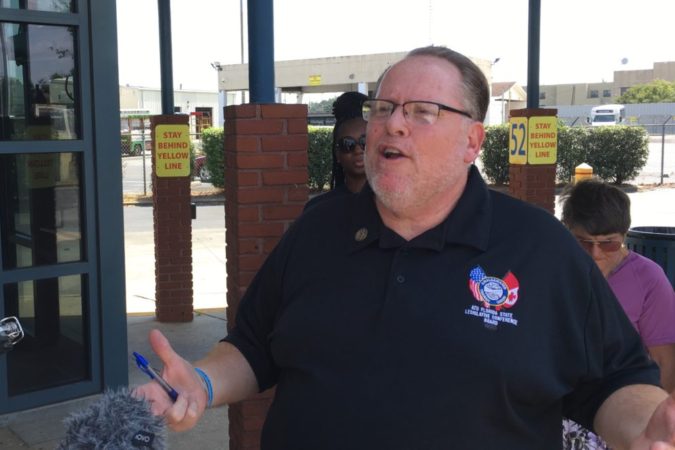 PENSACOLA: The ECAT melodrama continues. The Board of County Commissioners will consider today repealing the dependent special district it set up to handle public transportation.

County Attorney Alison Rogers has told Inweekly the vote has no impact on mass transit. WEAR TV reported on Monday that Commissioner Doug Underhill said it would lead to cuts in gas taxes, few routes and job terminations. Predictably ECAT workers are concerned.

Mike Lowery, Amalgamated Transit Union Local 1395 president, sounded off on the prospects of losing the transit authority Wednesday afternoon during a press conference at the Rosa Parks Transit Complex in Pensacola.

“You have not given it a chance to even operate,” Lowery lamented, contending that county commissioners were giving up on the special district his union fought for two years ago.

The transit authority was established in February 2017, when workers with Escambia County Area Transit, or ECAT, became county employees. The body is composed of the five sitting county commissioners.

“It’s just the board of county commissioners with a different hat on,” Commissioner Doug Underhill said Wednesday. “It’s just a senseless layer of government.”

“It’s a nothing burger. It doesn’t do anything. It doesn’t mean anything,” the commissioner said.

Underhill’s tune was different from what WEAR TV reported two days earlier. The station blew up the issue that the vote would lead to a cut in gas tax, reduction of routes and firings.

“We’re concerned there is a hidden agenda, which Commissioner Underhill put out there in the pubic, which is to cut service,” the union president said, arguing that ECAT could be at risk of limiting service and shedding employees. “I think their intention is to squeeze the system and make it smaller and not successful.”

Instead, Lowery said, the county should be investing in mass transit upgrades, like new buses, and rethinking the system’s service routes in order to reduce service in less popular areas and increase it in more trafficked areas.

“We have routes that are packed, that are one hour waits for people standing in 100 degree heat,” he said, also pointing to members of the community that rely on public transportation, such as the elderly or handicap.

Underhill downplayed the union’s concerns about cuts, saying that Thursday’s consideration of the transit authority is simply aimed at shedding an unnecessary layer of bureaucracy.

“That has nothing to do with what’s before us tomorrow,” the commissioner said.

That said, Underhill is in favor of cutting ECAT, of slimming what he calls a “bloated bus system.” He’d like to get rid of the county’s dedicated 4-cent transit tax, cut $4.5 million from the ECAT’s budget and lose eight bus routes. So far, such efforts are slow going — “probably because of the wailing and gnashing of teeth coming from the union side” — but he hopes to make a push for repealing the tax next year.

“Their bus system runs far too many routes, with far too few riders,” Underhill said. The commissioner has tried for three years to cut the gas tax and reduce routes. He has yet to win the support of his fellow commissioners. Few believe his 2020 effort will do much better.

The Escambia County Board of County Commissioners meets today at 5:30 p.m. at the county’s downtown Pensacola complex. Fireworks start with public forum at 4:30 p.m.

Rick Outzen contributed to this article.