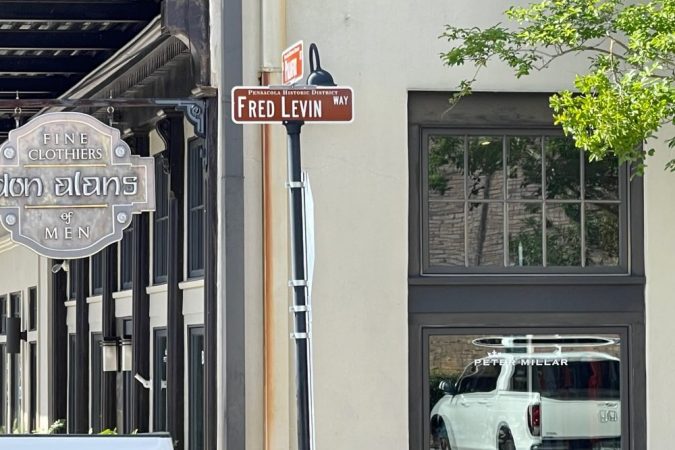 At the Fred Levin Way unveiling yesterday, Martin Levin talked about his father’s love for Pensacola and how much he would have enjoyed having the portion of Zaragoza that runs in front of the firm’s offices named after him.

“Dad had his endless critics, but he never let it back him down,” said Levin. “When he perceived injustice, he would speak out, and he didn’t care if people didn’t like his voice. He didn’t mind if they booed him, if they tried to shut him down, if they tried to destroy him. He wasn’t going back down.”

He continued, “Like Roy Jones Jr if you knocked him down, he is getting back up and ain’t leaving that ring. It ain’t happening. And in the end of dad’s fighting career, the critics faded, they actually started to admire dad, respect him, love him and even create a street.”

Levin has recognized his sisters, Marci Goodman, Debra Dreyer and Kimberly Brielmayer, who had been planning the celebration for nearly a year.

“I can promise you that none of this would be possible without them,” said Levin. “Like dad, everyone knows I’ll take all the glory and do nothing, and I am damn good at it. But the truth is, it was their face, their concept, their hard work. They are tremendous siblings, children, parents, and I love you.”

Levin also talked about the future of Levin, Papantonio, Rafferty, Proctor, Buchanan, O’Brien, Barr & Mougey, citing the leadership of Mike Papantonio, Mark Proctor and Troy Rafferty. He said if he were still alive, Fred Levin would talk about how proud he was of Papantonio’s impressive legal career.

“He would talk about his dear friend, Mark Proctor, who he always said was the greatest leader and grounded person he ever knew and was so proud he was his partner,” said Martin Levin. “Then he would talk about his little buddy. All he wanted to do was spend time with Troy. He couldn’t believe Troy had come to this firm. My brother-in-law Ross is the one who brought him out of law school and to rise where he is. Now he would remind Troy that Troy still owes him chicken wings for eternity.”

He added, “But he would also like all of you to know that Troy will be taking over after Pap’s ready to step down and take over the reins for the next 20 years. He’d want me to talk about Virginia, Buchanan. He said that she was the most compassionate, competent lawyer he ever met, and her ability to bond with clients and present their losses was stunning.”

Levin also praised the young attorneys on the masthead— Brian Barr, Tim O’Brien and Peter Mougey, calling them the “future of Pensacola.”

He ended his comments, “It’s at this time, I would like to introduce the newest street in downtown Historic Pensacola. And as everyone who knew Fred Levin, this name is very significant because, throughout his life, he did it the Fred Levin Way. Thank you, everybody.”