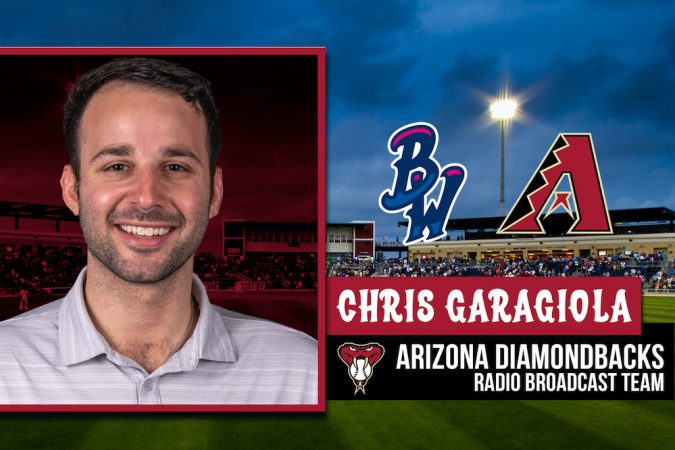 The Arizona Diamondbacks announced Tuesday the hiring of Chris Garagiola to join their radio broadcast team in 2022. After serving as the lead play-by-play broadcaster for the Blue Wahoos the past two seasons, Garagiola will move to the Major Leagues to provide in-game coverage of the Diamondbacks and pre- and post-game analysis.

“Chris is an exciting, up-and-coming, classic voice with a unique perspective on the game,” Derrick Hall, President and CEO of the Diamondbacks, said in the team’s announcement of the hire. “It is a thrill to bring home a native Phoenician and original D-backs fan to tell stories about his childhood team.”

“We’re very grateful for the contributions Chris made to our organization and excited to listen along as he takes this well-earned step in his career,” Blue Wahoos team president Jonathan Griffith said. “Our staff and our fans will miss having Chris in the booth next season, but we couldn’t be happier to send him home to Arizona to begin his career in the Major Leagues.”

The move to Arizona will be a homecoming for Garagiola, a Phoenix native, and a new chapter in the legacy of his distinguished baseball family. His father, Joe Garagiola Jr., served as the General Manager of the Diamondbacks from 1997 until 2005, leading the team to the 2001 World Series title, and remains a Special Advisor to the organization. His grandfather, Joe Garagiola Sr., played nine years in the Major Leagues before embarking on a Hall of Fame broadcasting career that stretched from 1955 to 2013 and included 15 years with the Diamondbacks.